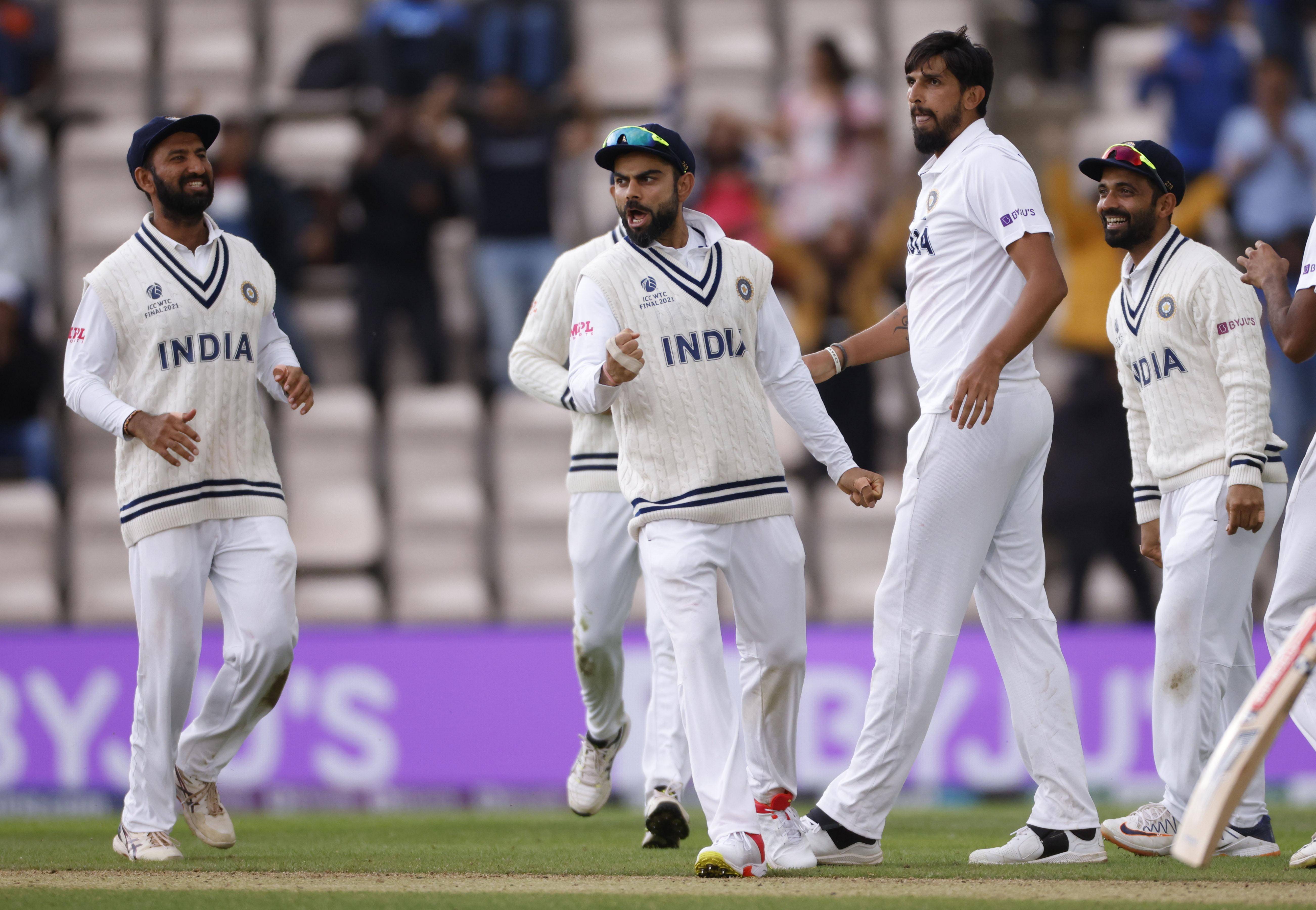 An absorbing day of high-quality cricket, cut short by bad light despite the floodlights being on full beam, ended with New Zealand 101-2 in reply to India’s first innings 217, a deficit of 116 runs.

New Zealand opener Devon Conway fell for 54 shortly before stumps — his third score of over fifty in just five Test innings following the 29-year-old left-hander’s stunning 200 on debut against England at Lord’s this month.

Jamieson is also in the early stages of his Test career yet the towering paceman still had a miserly return of 5-31 in 22 overs, including 12 maidens.

Yet India’s quicks also bowled well in helpful, overcast conditions that made batting difficult, with Mohammed Shami unlucky not to take a wicket after repeatedly getting lift from a good length.

In a match marred by weather interruptions — Friday’s first day was washed out without a ball bowled — India resumed on 146-3.

Kohli was 44 not out and Ajinkya Rahane unbeaten on 29.

But Kohli, 10 years to the day since his Test debut against the West Indies in Kingston, had failed to add his score when the nearly 7ft (2.13 metres) tall Jamieson got a full-length delivery to nip back and strike the star batsman on the front pad.

Kohli reviewed Michael Gough’s lbw decision but the English umpire’s ‘out’ verdict was upheld to end a stand of 61.

Such was New Zealand’s accuracy, Kohli’s 132-ball innings included just one boundary — a cover-driven four off left-armer Neil Wagner to get off the mark.

The usually free-scoring Pant needed 20 balls to get off nought, with a four through midwicket off Jamieson.

Two balls later, however, Jamieson dismissed the wicketkeeper when Pant, drove loosely outside off stump and was well caught at second slip by Tom Latham.

Rahane had batted in composed fashion during an admirable 117-ball innings with five fours.

But, one run shy of a fifty, the vice-captain was cramped trying to pull a Wagner short ball and lobbed a simple catch to Latham, now at midwicket.

But No 11 Shami denied Jamieson a hat-trick with a cover-driven four worthy of a batsman.

Latham and Conway may have had some lucky moments but they also demonstrated a sound technique during a classic Test-match opening partnership of 70 that spanned more than 34 overs.

But the stand was broken by off-spinner Ravichandran Ashwin who lured Latham, then on 34, into a mistimed drive with a slower, flighted ball although it needed Kohli’s leaping catch at short extra-cover to seal the dismissal.

Conway pressed on to a 137-ball fifty, including six fours.

His one truly extravagant shot appears to a one-legged ‘flamingo’ whip stroke and it proved his undoing when he mistimed it off Ishant and was caught at mid-on by Shami.

Match referee Chris Broad has a special dispensation to extend this final into a sixth day should he feels that will compensate for time lost earlier in the game.

This match, the culmination of the inaugural World Test Championship that has spanned two years of series between the leading Test nations, is worth $1.6 million to the winners and $800,000 to the runners-up.

A. Rahane c Latham b Wagner 49

I. Sharma c Taylor b Jamieson 4

K. Williamson not out 12