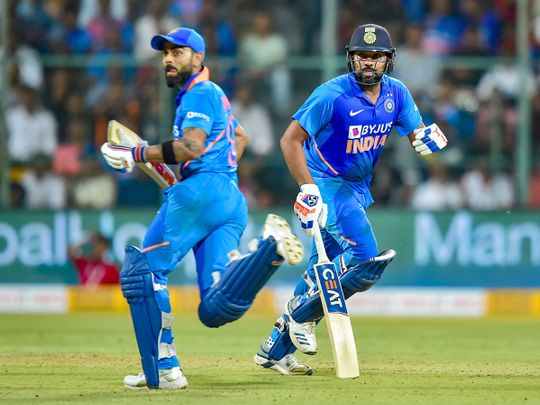 Kolkata: Virat Kohli played the role of a opener to nicety to offset for India’s opening woes as he and Rohit Sharma laid the foundation for an emphatic 36-run over England in Ahmedabad to clinch an absorbing T20 series by 3-2 margin on Saturday.

It was a surprise to see the Indian captain coming out to open with Sharma - a sight enough to send the shivers down the rival bowlers’ spines. Kohli (80 not out off 52 balls) scored his 28th half-century in T20s while Sharma (64 off 34) were simply unstoppable as they were instrumental in setting up a mammoth 224 for two - their highest T20 total against England.

Hardik Pandya, coming in at No.4, gave a late charge to remain unbeaten on 39 while Suryakumar Yadav continued from where he left off in the last game with 32.

The visitors began disastrously as they lost opener Jason Roy, the most consistent batsman for them in the series, was bowled by a sharp inswinger from Bhubaneshwar Kumar off the first delivery of the innings.

Jos Buttler was then joined by Dawid Malan, who took up the challenge to showcase the qualities which has taken him to No.1 in ICC rankings for T20 batsmen. The duo stitched a 130-run partnership and were maintaining a 12-plus run rate at one stage, though Buttler eventually failed to clear the long off boundary and perished to Kumar.

Coming back to international cricket after a one-year lay-off due to injury, ‘Bhuvi’ was spot-in with his line and variety to finish with two wickets while Shardul Thakur picked up three - his knuckle ball which deceived Malan being a treat.

Djokovic, Tsitsipas made to wait in rain-hit Rome

Mercedes dominate practice in Imola as Verstappen runs into trouble