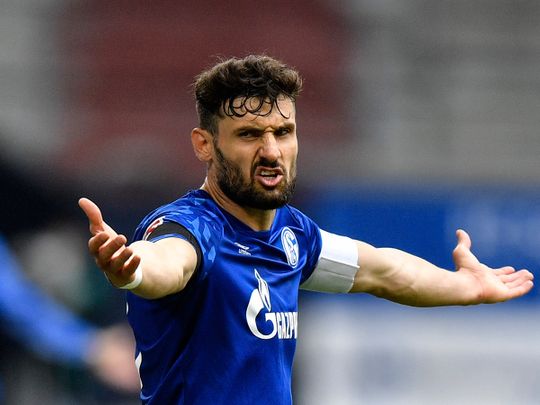 While Saturday’s Bundesliga clashes teed up a potential title decider between Bayern Munich and Borussia Dortmund on Tuesday, Sunday’s action in the only European top-flight to have resumed action since the coronavirus pandemic served up surprises that deepened Schalke’s worries and had RB Leipzig flying high.

The pressure was piled on Schalke coach David Wagner with a dreadful 3-0 loss at home to relegation-threatened Augsburg, and his side have fallen out of the title race and into mid-table, with four defeats in five games.

Heiko Herrlich was finally on the touchline for Augsburg, a week after he missed their loss to Wolfsburg because he broke quarantine rules to buy toothpaste.

“We’ll be celebrating quietly, because we don’t have much time. But we have managed to turn things around,” he added after Augsburg ended a run of four straight defeats.

Leipzig took control of third place in the Bundesliga standings, overtaking Bayer Leverkusen and Borussia Moenchengladbach, with a 5-0 thrashing on the road at Mainz.

Timo Werner, who is a summer transfer target for a number of English Premier League clubs, grabbed a hat-trick against their mediocre hosts, as Marcel Sabitzer piled Yussuf Poulsen piled on the misery.

In the day’s final game, Cologne fought back to stun Fortuna Dusseldorf with a 2-2 draw, denying Uwe Rosler’s side a huge victory in their relegation battle. Cologne struck twice in the final two minutes to rescue a point.