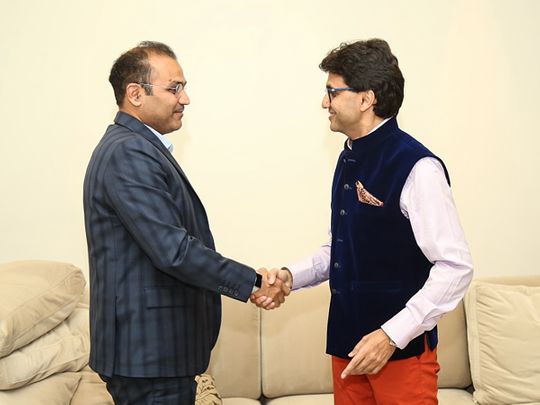 The year 1983 was the first time India had won the ICC World Cup and Pakistan won in 1992. Fans from both countries, where cricket is not just a sport but a religion, were wondering when the star cricketers would get them another title.

I am talking about the 2011 World Cup epic semi-final played at Mohali between these cricket-mad countries - 10 years ago where everything had come to a standstill after India beat Australia in the quarter-finals and were going to clash with their rivals Pakistan at Mohali.

I was lucky enough, along with my son, to win two tickets from Emirates Airlines for this much awaited semi. I was fortunate enough to even stay at the same hotel Taj where the players were staying. When I reached the hotel on March 29, the receptionist asked if I could give my room back and they would put me in another hotel close by as they had pressure from film stars to politicians to get a room in that hotel. I flatly denied it as I could not let this opportunity of sharing the same hotel as the Indian and Pakistani players slip away.

As I took the lift to my room with my son, I bumped in to a few Pakistan players like Misbah Ul Haq and young Umar Akmal. My young son’s day was made and he immediately asked for a picture with them. We were hoping that we would meet Indian players later on but unfortunately we could not meet even one player as the Indian players had been given a separate floor all for themselves with police making sure we could not meet them.

Every media channel was trying to get their Television Rating Points up by talking about one subject, this India-Pakistan game and who would come out triumphant on that day. The build up was so huge that even the Prime Ministers of both countries were going to attend the game. Even Sonia Gandhi and Rahul Gandhi were present.

Sachin Tendulkar had said he had not slept for the 12 nights leading up India’s game against Pakistan in 2003 World Cup but there was even more hype for this game as he was just one short of his 100th international hundred going in to this match.

There was pressure on both the teams as the hype created for this game was gargantuan and every player knew this game would go down in the history books. The winner would make it to the finals of an ICC World Cup. There was a lot of drama before the game. On the evening before the match, the skies opened up and it was raining cats and dogs, leaving everyone wondering if the game would happen or not since there was no spare day allotted in case the game rains out. To the relief of everyone the next day was a bright and sunny one in Mohali.

The match was at 2.30pm in India but to ensure that we were not late, my son and I reached the venue at 10.30am after having a quick breakfast to catch a glimpse of every action before the game. All roads were leading towards one place, the Mohali Cricket Stadium in Chandigarh.

Dhoni won a very crucial toss and Virendra Sehwag set the tone for the game as India reached 47 runs in just 5 overs before Wahab Riaz got him lbw. India managed to reach 260 on the back of Sachin Tendulkar’s 85 and the crucial 36 by Raina, off just 39 balls.

The target of getting 261 was not that big but the pressure of the semi-final was evident as the Pakistan batsmen caved and fell short by 29 runs, kicking off celebrations in the India camp and for fans all around the world. It took me two hours to return to my hotel as everyone was out on the roads to celebrate India’s win.

One team had to win and that was India, and this victory still gives me goose bumps even after 10 years as the build up to the game was so huge. Moreover India, few days later, went on to win the 2011 World Cup against Sri Lanka in Mumbai and this made it even more special.

WATCH: Rishabh Pant takes up the lawn mower to keep himself fit

Felt I would never be able to play again after 2008 Beijing Games pull out, Sania reveals

IPL 2021 Match 26: Punjab Kings pull off a shocker against Royal Challengers Bangalore — as it happened

Thwarted – e-hailing driver's bid to smuggle woman past a roadblock