UAE weight-loss: 'How I lost 33kg in 7 months while eating chocolates' 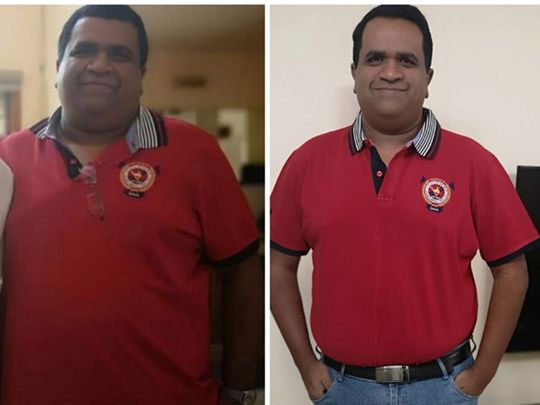 Chocolate for breakfast. Gulab jamuns. Falooda. These are all part of George Koleos’ diet on which he’s lost 35kg over seven months.

The 43-year-old from Kerala, India, says: “I don’t think you can’t eat anything in this world – just eat in moderation.”

But moderation is only a small part of what the 183cm tall Koleos has been doing to get here. And it took a while to get here. “By age 8 I had started putting on weight,” he recalls, speaking of the bullying and unkind names he heard while growing up. He made many plans, “to reduce quantity, exercise” over the years but nothing was working out. Then came his 43rd birthday. “I realized that I was in my 40s and I needed to be careful about my health. When I tested, my sugar and all that – everything was borderline.”

It was also around this time that a childhood dream he had once had began to come true; he joined a Tennis Academy. “For me, Tennis was a passion from childhood. I never played but I watched lot of matches. And for me, growing up in India, Tennis was always a rich man’s game. For me it was a dream come true when I got to play Tennis. I made maximum use of this.”

A love for the game meant a commitment to exercise that had been missing. And the desire to better his moves meant getting fitter. On days he could not play – and these were rare occasions, he says - he’d go for a 45-minute walk. “Tennis and food control has really helped [me lose weight],” he says.

He explains: “By nature I’m a foodie – but I have brought down my food to 1/3rd of what I used to eat. So if I had 6 chapattis at night, I brought that down to two. I stopped having rice or French fries. All those starchy items. I stopped sugar four years ago in tea and coffee [so that part was easy]. I stopped drinking aeriated drinks; I was an addict, on average I would have a coke every 2 days. I used to eat loads of chocolate every day – I cut down on all of that. It would be hard to believe in the past seven months I have had only 2 cokes.”

A typical day';s menu
Morning:
Toast with cheese spread or peanut butter. One egg. With black coffee
Or
One chocolate + bowl of oats + coffee

Dinner
2 Dosas + chutney + 2 eggs
Or
1 cup of Puttu with a sweetener. Plus, a bowl of pea curry or an egg
Or
Grilled chicken + ice cream

On cheat meal day: Dinner is a bowl of cereal with lactose-free milk

But Koleos wasn’t about to let go of all his treats. “Irrespective of all this I have kept a cheat meal for myself on Fridays, at that time whatever craving I have I don’t look at quantity, I eat,” he says.

Oh and while he did give up the three bars of chocolate a day plan, he did manage to sneak it into his menu. “I have kept two days a week where I eat chocolates for breakfast,” he explains.

“On Wednesday and Thursday I eat a bar of chocolate for breakfast. I have devised a lot of things [to help me stay on track]. [For instance] I like lemon juice a lot. So I drink lemon juice every two days – I don’t use sugar, I use natural sweeteners such as Natura instead.”

And if he’s out with colleagues, he’ll still indulge in gulab jamuns or falooda.

Yet over seven months, Koleos went from being 148kg to being 117.

The path hasn’t been easy; portion control rarely is. “I always think [if] I get these little bouts of hunger is no pain no gain. What I tell myself is if you are getting pangs of hunger it is your body saying something is working. And I try to motivate myself – I tell myself I’m not going to die or anything. I have enough fat on my body that the body can use to burn out. That has worked,” he says.

“There have been many times I have felt I was starving, but I held on to this,” he adds.

Plus, when others start to notice a change, their words of encouragement can add to motivation, he says. “ When people start talking to you, praising you it motivates you,” he says.

“[For now,] I want to reach 93kg. In the last one-one-and-a-half months, my weight loss [momentum] has gone down. I’m in the plateau zone now.

“I’ve heard I need to reduce my food or increase my fitness. But as it is I’m happy with what I’ve achieved and I want to keep going,” he says.

It’s not about pleasing others, stresses Koleos, it’s about being true to who you are. He says a person’s greatest enemy is himself. But he can also be his own biggest ally. You can have your chocolate and eat it too. Just look at Koleos.

UAE: Wondering what to cook during the long Eid break? Here are a few ideas from the Food team

How to make Ensaladang Mangga

Fashion industry gets a makeover, as virus forces a rethink

Italian Open: Simona Halep in doubt for French Open after a calf injury

Italy fines Google over $120 million for abuse of market position

Tennis: French Open fans must prove they are COVID-19-free to attend Roland Garros