The art of gifting tea 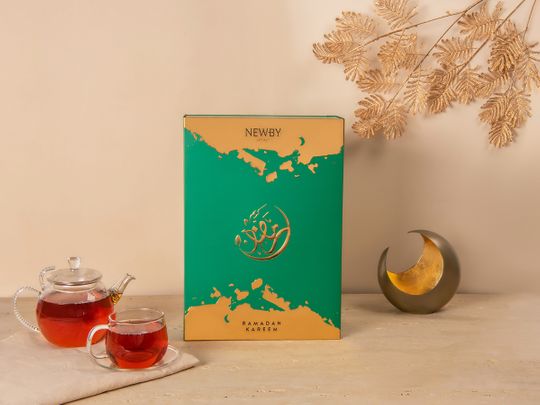 Tea has played an integral part in uniting families and friends across cultures. It’s one the most enduring beverages in the history of humanity. Nothing says you care more than a gift of tea, especially during Ramadan.

Tea is the kind of gift that can be tailor-made to demonstrate how well you understand your family, friends or colleagues. This is probably why it is fast becoming a popular gift. It doesn’t hurt that this beverage also traditionally denotes wellness and prosperity.

“At Newby, we understand that tea has a rich and complex past,” says Mr Nirmal Sethia, Founder and Chairman, Newby Teas. “Over 5,000 years of history are behind every cup of tea that we enjoy. Wars were fought over it, empires have risen and fallen over it, kings gifted it, and holy men meditated over the humble cup of tea.”

Tea is seen as the most quintessential of English beverages, but is a relative latecomer to British shores. Although the custom of drinking tea dates back to the third millennium BC in China, it was not until the mid-16th century that it first appeared in England. It was the Portuguese who brought tea from China to Europe in the late 15th century and early 16th century.

In the 17th century, tea was the gift of choice among aristocracies and royalty. The Portuguese used to sell both, tea and bone china crockery used to prepare it. Britain was dependent upon the Dutch network to acquire tea. In 1662, King Charles II decided to marry Catherine of Braganza, the daughter of the Portuguese emperor. A regular supply of tea from China was part of the dowry agreement. No surprises there as tea was very rare at the time.

“Throughout history, tea was not only the drink of choice for the elite, but was also a favourite gift to show generosity and thanks,” says Mr Sethia. “Of course, it is brilliant that we no longer have to be royalty to enjoy a cup of tea, but something was lost during the democratisation of tea.”

While drinking a tea is a comforting experience, a cup a day has its health benefits too. Depending on the blend, it can help with anti-aging, stress relief, and even strengthen cardiovascular health.

“The health benefits of drinking tea outweigh the sheer pleasure indulging in tea for its taste and character,” explains Mr Sethia. “Regarded for thousands of years in the East as an elixir to vitality, tea has caught the attention of researchers worldwide. “At Newby, we pride ourselves in only using the finest tea leaves, so each and every cup is bursting with goodness. Whether it be our pure green blends or inspired infusions, loose leaf or silken pyramids, you can trust that our teas are of the highest quality.”

As a fine tea company — Newby teas are of exceptional character and should preferably be consumed without milk or sugar. “We strive to rediscover the craft of fine teas and its legacy,” says Mr Sethia. “Join us on our crusade to bring back this lost tradition of gifting the finest and bespoke.”

If you’re struggling to figure out where to buy some excellent tea, don’t worry — we’ve got you covered with these gift options.

What would you gift a tea lover who enjoys the finer things of life? Check out this elegant box featuring a magnificent arched gate, which was a significant architectural element in the ancient Islamic era. Known for symbolic precepts such as unity, beauty and light, Newby’s Gate Calendar Box features an exotic selection of teas neatly tucked into 30 little drawers, all beautifully packaged and individually sealed for freshness. With 90 classic tea bags and 24 flavours, it’s a steal!

This special gift box is the perfect way to show somebody you care. It’s filled with luxury silken pyramids, individually wrapped in lustrous sachets for freshness. Finished with a subtle Arabic motif to send your dear ones an affectionate message, this sublime box contains four premium whole leaf green teas and tisanes. It’s sure to make someone feel special.

Looking for a gift for the art lover in your life? Newby collaborates with the Van Gogh Museum, Netherlands to present a trio of bespoke teas, each inspired by works from the museum. Each blend is a masterpiece of both aroma and taste: a sensory celebration of Vincent van Gogh’s most renowned pieces. With flavours such as Almond Calm, Earl Grey and Sunflower Dew, any tea lover or admirer of the great artist will swoon.

A dosa waffle: The side dish that stole the show

Fashion industry gets a makeover, as virus forces a rethink