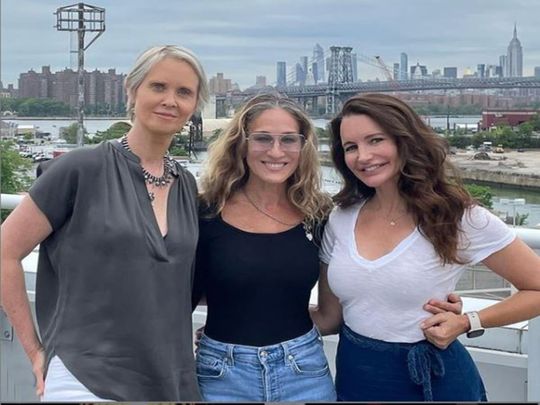 And just like that, the girls from ‘Sex and the City’ are back together with Sarah Jessica Parker posting images from the cast reunion on her Instagram account.

It’s been more than a decade since Parker, along with gal pals Cynthia Nixon and Kristin Davis, appeared together onscreen as their characters from ‘Sex and The City’. The trio has reunited to shoot a special 10-episode special for HBO Max, titled ‘And Just Like That…’.

In the photo posted on Friday night on Instagram, the girls are seen beaming at the camera, with Parker writing: “Together again,” with New York’s famous Empire State Building serving as the backdrop.

Parker also posted images from the cast reading, writing: “Read through our first episodes. @justlikethatmax Alongside all the fellas and our newest cast members. Like an ice cream sundae.”

The revival will include three-quarters of the leading ladies — Parker playing Carrier Bradshaw, Nixon returning as Miranda Hobbs and Kristin Davis back as Charlotte York. Kim Cattrall, who played the sassy Samantha Jones, refused to join any kind of revival of the show in the past and has famously feuded with Parker over the years.

The story is supposed to pick up whether the film left off, with ‘Sex and the City 2’ releasing in 2010.

Despite Cattrall famously missing from the new series, fans will be delighted to know that several of the cast regulars have returned for the revival, including Chris Noth who played Mr. Big and married Carrie in the corresponding film.

David Eigenberg is also returning as the lovable Steve Brady, who is married to Miranda, while Evan Handler is back as divorce attorney and husband to Charlotte, Harry Goldenblatt.

In April, Page Six had interviewed actor John Corbett who had confirmed he will be reprising his role of Carrie Bradshaw’s ex-fiance, Aidan Shaw, in the hotly anticipated show reboot.

The 59-year-old entertainer said, “I’m going to do the show,” adding that the news is “very exciting” for him.

Concerning the number of episodes he will show up in, Corbett said, “I think I might be in quite a few.”

“I like every one of those individuals, they’ve been nice to me,” he added.

On the long-running HBO show, Corbett played hapless furniture designer Aidan, whom Carrie not only cheated on with Mr. Big, but subsequently dumped when he wanted to get married. He appeared in the movie sequel, running into his ex-love in Abu Dhabi, where the two shared a romantic meal and a kiss.

A new face joining the cast is actress Sara Ramirez, best known as Dr. Callie Torres on ‘Grey’s Anatomy’. Not much has been said about her character on the revival accept for her name; Ramirez will play Che Diaz on the special.