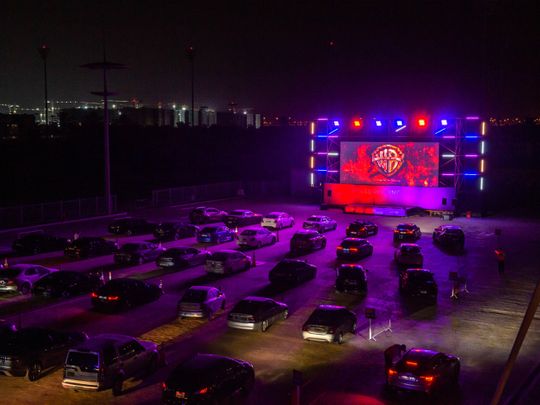 In a world where social distancing has become the new normal, it isn’t surprising that another drive-in cinema experience shifts gears for the UAE, with Abu Dhabi welcoming the Reel Cinemas Yas Marina Circuit outlet this past weekend.

With screenings every Thursdays, Fridays and Saturdays at 7.45pm, this is Reel Cinemas third such drive-in experience, after The Dubai Mall Zabeel and a second at Dubai Hills Estate.

With a capacity of 65 cars in total, three people are allowed per vehicle if you are viewing as a single family. Tickets are priced at Dh160 per car, which includes and food and beverages package that comes with popcorn, soft drinks, water and chocolate. Extra snacks can be purchased.

According to Reel Cinemas, the first weekend at the Yas Drive In was sold out, but more films to be shown at the venue over the coming weeks.

The UAE has seen a spate of drive-in cinemas open up following the lifting of movement restrictions in place due to the coronavirus pandemic. While Vox Cinemas Drive-In at Mall of the Emirates was the first to open, Reel Cinemas soon followed with its two outlets, followed by Sharjah accelerating towards its own drive-in cinema concept, which opened to the public on July 1 in the form of ‘Movie Nights at Aljada’.

Meanwhile, those looking to give a spin to Yas Island’s new drive-in cinema can cut a ticket for the line-up of films coming up, including ‘Gravity’ (July 16), which stars George Clooney and Sandra Bullock, ‘Ready Player One’ (July 17) and ‘A Star is Born’ (July 18), featuring Bradley Cooper and Lady Gaga.

With social distancing rules still in place, visitors will have their temperature checked with hand-held devices, with PPE (Personal Protective Equipment) kits on hand should it be required.

As an added safety precaution, prayer rooms, along with shower and locker facilities, will not be available at this time. Guests will also be required to wear face masks if windows are lowered to speak to event staff and when leaving their vehicles at the venue.

Raj Kundra arrest: My husband in the business of erotica and not pornography, says Bollywood star Shilpa Shetty