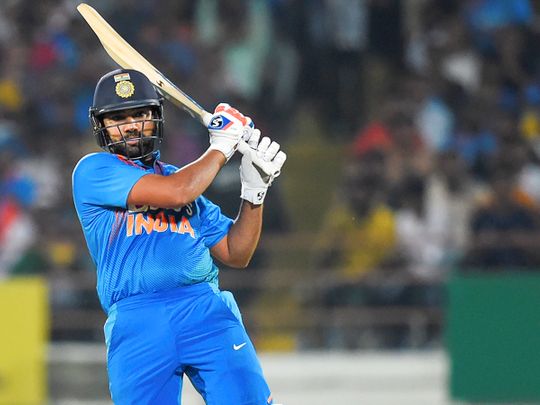 Rajkot: Stand-in skipper Rohit Sharma was at his menacing best during the second T20I against Bangladesh which India won comfortably by eight-wickets to level the three-match series.

Chasing 154, Rohit - who was playing his 100th T20I - smashed 85 runs and helped the team get across the line with more than four overs to spare at the Saurashtra Cricket Association Stadium on Thursday evening.

During his 43-ball knock, the 32-year-hit 6 fours and 6 monstrous sixes and brought the Rajkot crowd to its feet.

After his Man of the Match performance, Rohit appeared on the Chahal TV, hosted by leg-spinner Yuzvendra Chahal, and revealed the mantra for hitting sixes.

"You don't need huge body and muscles to hit big sixes. Even you (Chahal) can hit sixes. Power is not the only thing you need to hit sixes, you need timing as well. The ball should hit the middle of the bat and your head should be still. So, there are a number of things you need in order to hit a six," he added.

During the six-hitting spree in Rajkot, the Indian skipper went on to break and set a few records.

He now holds the record for most sixes by an India captain in T20I cricket. With 37 sixes in just 17 innings, the Mumbai batsman went past M.S. Dhoni's tally of 34 (62 innings). Virat Kohli is third on the list with 26 sixes (26 innings).

Talking about his innings, the star Indian opener said: "It was very important from us to give a good start to the team as it is often seen that a set batsman wins the match for the team. I was a little unhappy that I got out at the wrong time. But nevertheless, I am happy with my performance as well as that of the team because we were under a lit bit of pressure."

"We had lost the first match in Delhi and it was important to win here in Rajkot," he added.

Rohit also now holds the record for the most number of sixes in international cricket in 2019 across formats. He tops the charts with 66 and counting. He had held the record in 2017 and 2018 as well wherein he had hit 65 and 74, respectively.

The two teams will now face each other in the series finale in Nagpur on Sunday.