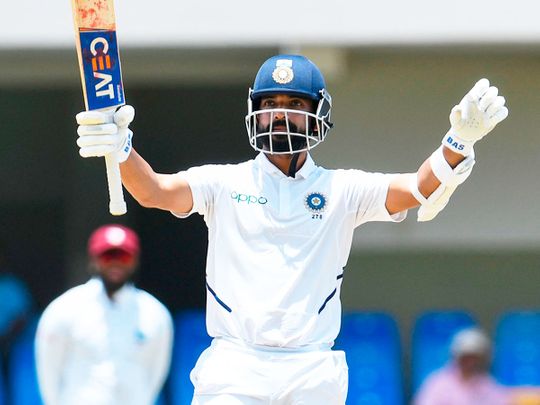 Dubai: The earliest that Ajinkya Rahane, India’s vice-captain and a pillar of their batting line-up, can look forward for a return to competitive cricket is now the Indian Premier League - if it eventually takes place. The break and the uncertainty over the cricket calender, imposed by the COVID-19 pandemic, has been a novel experience for ‘Jinx’ but he is not alone in this.

‘‘You see, one can only control the controllable. We came back from New Zealand earlier this year and then from March 26, the lockdown started. I have been following the same routine for nearly four months now and not looking ahead too much,’’ said Rahane.

It was last Wednesday that international cricket resumed with the three-Test series between England and the West Indies at Southampton - and much like the rest of the international cricket community, Rahane was also overjoyed. ‘‘So nice to see that cricket is back! Good luck to both the teams! Can’t wait to get back on the field again,’’ he had tweeted.

The scenario, however, is much grim in India where the virus has hit a peak with cases rising in the region of 25,000-plus every day now - making the Board of Control for Cricket in India (BCCI) wait and watch before giving the cricketers the clearance for outdoor practice sessions. Speaking to Gulf News over phone in an exclusive interview from Mumbai, Rahane said: ‘‘We will need about three to four weeks’ preparation to get back into the groove as we have been out of any cricketing routine. Right now, I do my regular physical routine at home and help out my wife (Radhika) with household work and spend some time with my daughter who will be one-year-old in October - this has been a big bonus for me during the lockdown.

‘‘We don’t have any domestic help now because of the pandemic, so there is enough chores to be done at home,’’ added the affable Rahane.

Looking ahead at the remainder of the season, Rahane’s biggest challenge will be to deliver in the crucial No.5 position again in the four-Test series against Australia later this year. It was a phenomenal trip last time around for India in Down Under in 2018-19 when they won their first series there in 70 years, but the Aussies will certainly take their best foot forward with the comeback of the prolific Steve Smith and David Warner.

Rahane, himself, prefers to treat it as yet another series and feels there is still enough time before the tour. ‘‘It’s better to be in the present as there is still a lot of time left. To me, every series is important as I always think how I can do better. Yes, winning in Australia last time was a big thing and we will again plan on how to do things better for ourselves,’’ he said.

I can play in all the formats and I believe in all of them. I have contributed to the team cause as opener, No.3 & 4, wherever I have been sent. It doesn’t really matter as to what people say but I would like to play in all formats

The uncertainty over the IPL, which was ‘indefinitely postponed’ in April due to the lockdown, meant that Rahane will have to wait to work with Ricky Ponting, now the head coach of his new franchise Delhi Capitals. It was late last year that Rajasthan Royals had traded their most-capped player to the Delhi franchise after eight years and Rahane and senior off spinner Ravichandran Ashwin are expected to lend a major experience quotient to the team.

‘‘Yes, I have been a big admirer of Ricky...I used to copy him in batting as well as fielding. I am really looking forward to playing under him and I am told that in the Delhi team, they really enjoy each other’s success,’’ Rahane said.

It’s however no secret that the cricketer whom he acknowledges to be his ‘mentor’ is Rahul Dravid, with whom he has spent some extremely profitable years at the Royals. Looking back at his relationship with ‘The Wall’ of Indian cricket, Rahane said: ‘‘It was from much before our IPL stint that I have known Rahul bhai. We met for the first time during a Duleep Trophy match between the West and South Zones where he came up to me and encouraged saying that he had liked my approach to batting. The association at Royals came much later and I will say that it’s been a great privilege for me to open the batting with him.’’

While Rahane’s overseas Test record has often come in for praise from some of the legends of the game, his tenure in white ball cricket had come in fits and starts - despite him featuring in 90 ODIs so far. During the build-up to last year’s ICC World Cup, when the No.4 position in India’s batting line-up almost became a national crisis, Rahane did not quite in the team management’s radar.

Now 32, does Rahane have any ambitions left in the international white ball cricket? This time, the Mumbaikar was on the frontfoot: ‘‘I can play in all the formats and I believe in all of them. I have contributed to the team cause as opener, No.3 & 4, wherever I have been sent. It doesn’t really matter as to what people say but I would like to play in all formats.’’

RAHANE AT A GLANCE

'A Quiet Place 2' release pushed yet again amidst the pandemic