We had nothing to lose coming into the T20Is, says Mushfiqur 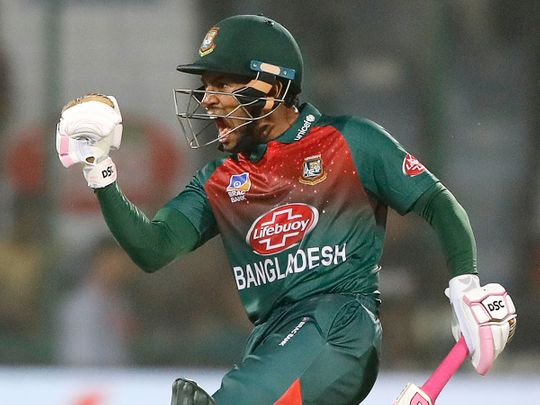 New Delhi: Wicketkeeper-batsman Mushfiqur Rahim, who guided Bangladesh to their maiden T20I win over India, believes the visitors had nothing to lose coming into the series which in turn provided them with the freedom to play fearless brand of cricket.

On Sunday, Mushfiqur single-handedly helped Bangladesh chase down 149 with an unbeaten 60 on a sticky surface in the smog-hit series opener at the Arun Jaitley Stadium.

“It’s a great moment for Bangladesh cricket because we had not won against them (India) in the T20 format before,” Mushfiqur told reporters after the match.

The win was special considering that Bangladesh were missing two of their key players — Shakib Al Hasan and Tamim Iqbal — in the contest. And Mushfiqur credited the team’s youngsters for making it happen.

“And as you said, we were missing a couple of our key players (Shakib and Tamim) in our line-up, but I thought the way the young players have stuck together and the way our bowlers are bowling, especially against India, it’s outstanding. They set up the game,” he said.

“We have come here to compete in each and every game. As long as you are playing consistent cricket and improving in each game — that is our main goal. After winning this game, we are surely looking forward to winning another game; hopefully, the next game. We had nothing to lose coming into this game and the whole series, so that gives us a great cushion and the freedom to play to our potential and a fearless brand of cricket,” he added. Sunday’s game seemed to have flashes of recall from the India-Bangladesh World T20 contest, Mushfiqur and Mahmudullah yet again found themselves in the middle in the closing stages of the chase. In the Super 10 fixture in 2016, Bangladesh needed two off three, but lost back-to-back wickets to eventually fall short by one run in Bengaluru.

However, this time around, they managed to cross the line without a stutter and helped the team take a 1-0 lead in the series.

“It can happen to anyone, and when you have a career of 10-15 years, you can have such matches. We’ve also stayed there till the end and closed out games, and so that also adds to the confidence. In the last over, we just needed four runs, and I thought we were cruising. I had a chat with Mahmudullah to make sure and get some ones and twos because there was a lot of space on the on side,” said the 32-year-old wicketkeeper-batsman

“As long as you’re learning from the mistakes, that’s the most important part. After that incident, I’ve been able to close the game on three-four occasions for Bangladesh in both T20Is and ODIs, so that gives me a lot of confidence,” he added.

Mushfiqur also identified death bowling as one of the areas to improve in the remaining two games on November 7 (Rajkot) and on November 10 in Nagpur.

“We won, but there are a couple of areas we can improve in. In the last two overs, we gave away a couple of easy boundaries to them. We also need to close well with the ball,” said Mushfiqur.

“If we improve in those areas and play much better than what we did tonight, then I think there is nothing impossible in the next game. We will try our level best to compete against India,” he added.