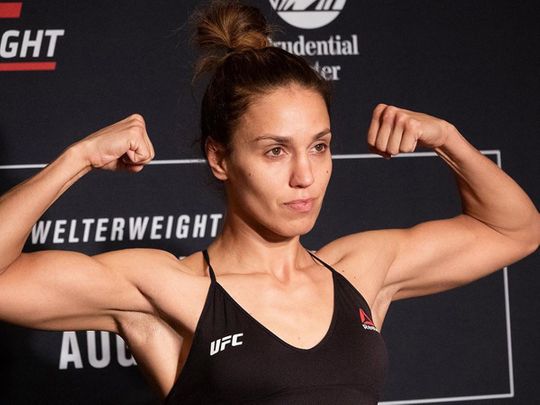 Dubai: The MMA bandwagon continues to roll on through the COVID-19 pandemic and will stop at the company’s Apex Arena in Las Vegas, Nevada, on Saturday. to host what looks to be another spectacular 11-fight card framed for UFC ESPN-9.

The main event feature an intriguing welterweight (170lb) bout between the division’s former champion Tyron Woodley and No. 9 ranked Gilbert Burns. The fight is expected to be a major turning point in the careers of both fighters.

Woodley (19 wins, 4 losses) famously knocked out form UFC Welterweight Champion Robbie Lawler in the first round of their July 2016 bout to win the title, but has since been in and out of the Octagon.

The main card features four more exciting match-ups, but it is the main event of the preliminaries that looks the show-stopper of the evening.

Although fans will not be permitted into the facility due to restrictions following the coronavirus pandemic, the Katlyn ‘Blonde Fighter’ Chookagian vs Antonina ‘The Panther’ Shevchenko flyweight contest has the potential to bring the house down.

This is a hugely interesting fight, considering that the 31-year-old Chookagian is facing the older sister of the fighter who handed her a KO/TKO defeat at UFC 247 in February — the reigning champion Valentina Shevchenko.

The elder Shevchenko (8 wins 1 loss) is coming off a submission win against Czech Lucie Pudilova on February 8 at UFC Fight Night.

Obviously Chookagian, who boasts that she has the best hair in MMA, will be looking to settle the score against the Shevchenko sisters while Antonina will aim to keep the family record intact against the New Jersey native.

Chookagian, four years the younger fighter, holds a narrow one inch reach advantage over the southpaw Antonina, who has a 67-inch reach.

Although Chookagian is ranked 14 place higher than her rival in the lightweight division Shevchenko will aim to bring her Muay Thai skills into play and also the techniques that her younger sister will advise her to use, having comfortably beating the American in her most recent fight.