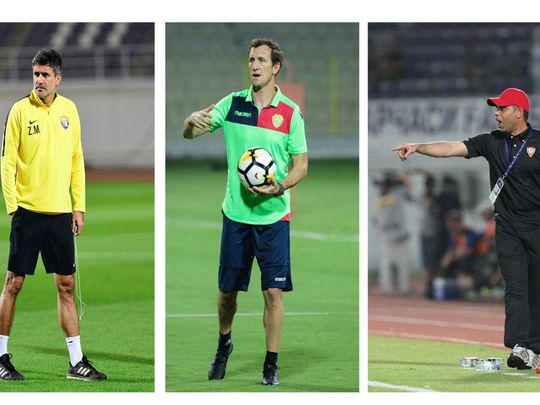 On Monday, the UAE Football Association (UAE FA) cited the prevailing situation due to the coronavirus pandemic as the reason behind the termination of Jovanovic’s contract before the Serbian had finished his six-month term with the national team in June. Appointed just before Christmas last year, Jovanovic was to get a first taste of action with the Whites scheduled to take on Malaysia at home on March 26.

However, the entire qualifying schedule for the 2022 Fifa World Cup Qatar and the 2023 AFC Asian Cup China was postponed by the governing bodies for the sport. While thanking the 57-year-old Serbian Jovanovic, the UAE FA admitted that “the decision was made based on the recommendation of the Football Association’s National Teams and Technical Affairs Committee headed by Yousuf Hussain Al Sahlawi”.

Leading the list of probable candidates is Arruabarrena, the young coach who stepped down from his position at Shabab Al Ahli Dubai before the coronavirus-enforced break in the second week of March. First at Al Wasl and then at Shabab Al Ahli Dubai, Arruabarrena was held in high esteem for his astute footballing mind that relied on a delicate blend of experience and youth within the team.

However, a couple of bad results – the 1-2 loss to Al Nasr in the final of the Arabian Gulf Cup in particular – took its toll and the 44-year-old Argentinean was replaced by Spain’s Gerard Zaragoza, only 38, as caretaker coach till the end of the season.

Another name making the rounds is that of former Al Ain manager Mamic, who in fact, was expected to lead the UAE campaign at the 2019 AFC Asian Cup held on home soil last year. But, high-profile Italian Alberto Zaccheroni was preferred as Mamic took over as sporting director at Dinamo Zagreb in Croatia.

Mamic is well aware of the football culture in the UAE, thanks mostly during the two seasons he spent with Al Ain till his departure to Al Hilal in Saudi Arabia in early 2019. But after just three months with the Riyadh club, Mamic returned to his native Croatia.

While in Al Ain, Mamic tasted success with the UAE Pro League title and the President’s Cup at the end of the 2017-’18 season, while also leading the club to the runners-up spot at the 2018 FIFA Clubs World Cup.

Mehdi Ali, meanwhile, may also be considered as one of the candidates for the post following his rich success with a generation of players who are just getting past their prime now. Mahdi Ali was perhaps among the most successful coaches with the UAE following a stint from 2012-2017 during which his biggest trophy was the UAE winning a second Arabian Gulf Cup crown in Bahrain in January 2013 - apart from qualifying for London Olympics. After stepping down, Mahdi Ali has preferred to maintain a low profile in domestic football.

The UAE FA’s National Teams and Technical Affairs Committee that was temporarily headed by Humaid Al Tayer, now has Al Sahlawi in charge and a decision on a new coach is expected to be made in the near future.