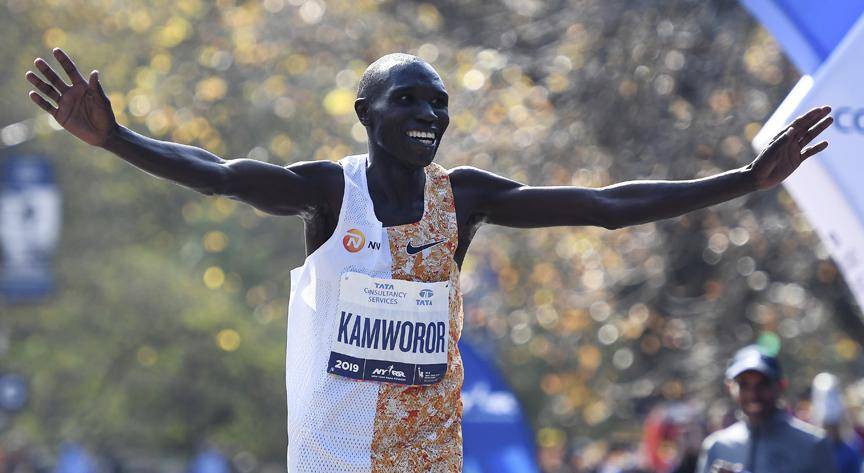 Following an initial announcement in November 2020, the Ras Al Khaimah Half Marathon 2021 has confirmed an even stronger line up of world-class elite athletes, all confirmed to take part in the upcoming race on Al Marjan Island on February 19.

With preparations well underway and over 60 of the world’s fastest elite runners participating, the Ras Al Khaimah Half Marathon 2021 is predicted to be the ‘World’s Greatest Half Marathon’ ever seen.

Former Half Marathon world record holder, Kenyan Geoffrey Kamworor (58.01), will return to Ras Al Khaimah after being out of action for more than a year due to injury. He achieved his world record title in the Copenhagen 2019 Half Marathon, with an impressive time of 58.01. As things currently stand, the elite male field will have three athletes in the race with a personal best under this time.

Kamworor’s achievements do not stop there, the elite athlete is also a two-time New York City Marathon winner — securing first place in both 2017 and 2019 — and a three-time World Half Marathon Champion, from his victories in Copenhagen 2014, Cardiff 2016, and Valencia 2018.

Also confirmed for the race is Ethiopian Shura Kitata who has a personal best of 59.47 and the 2020 London Marathon title to his name. Joining the line-up of lightning-fast elite athletes in February is another Ethiopian athlete, Jemal Yimer. Yimer holds a personal best time of 58.33 and was ranked second in the World Road Running Competition in both 2018 and 2019. He is also the current Ethiopian National Record holder over the half marathon distance.

Kenyan-born Reuben Kiprop Kipyego will be making his half marathon debut this year. He recently achieved his personal best time of 2.04.12 at the 2020 Valencia Marathon in October. Kipyego also won the ADNOC Abu Dhabi Marathon in 2019, coming in ahead of several other strong competitors.

Joining the stellar line-up of top athletes are Italian elites, Yeman Crippa and Eyob Faniel, who will go head- to- head for the Italian National Record. Ethiopian-born, Italian long-distance runner, Crippa, will be making his half marathon debut in February, and is the current Italian record holder for 3,000-5,000-10,000m races. He is also the 2018 European bronze medallist in 10,000m and the 2019 European Cross-Country silver medallist. Meanwhile Faniel is the Italian record-holder in the Marathon and 10, 000 distances (equalled on 31 December 2020).

For the elite female race, Kenyan Hellen Obiri, the reigning World Outdoor Champion in 5,000m in the 2019 European Cross Country will be making her half marathon debut at the upcoming Ras Al Khaimah Half Marathon 2021. Obiri holds the Olympic silver medal in 5,000m from the 2016 Olympics and is the former World Indoor and Outdoor Champion in 3,000m and 5,000m, respectively.

German distance runner, Melat Kejeta, holds the European Record with a spectacular time of 1.05.18, where she gained her spot as silver medallist during the 2020 World Athletics Half Marathon Championships in Gdynia, Poland, and will also participate in the most exciting half marathon in February. Adding to this incredible line-up is Namibia’s Helalia Johannes, the reigning world bronze medallist in the marathon distance of the 2019 World Athletics Championships.

Next up is South African Gerda Steyn, the 2018 and 2019 2Oceans Ultra Marathon Champion and Comrades 2019 Champion, who also achieved 7th place in the 2020 London Marathon. She also successfully ran her half marathon personal best time of 1.10.55 at the 2020 Ras Al Khaimah Half Marathon.

To ensure the safety of the participating elite athletes, organisers and management, the Ras Al Khaimah Half Marathon has diligently put together a range of ‘elite bubble’ procedures.

The Ras Al Khaimah Half Marathon 2021 will also host two virtual press conferences; one on the 17th February to introduce its star athletes and another on the 19th February to announce the winners.

With only a few days left until registration closes for the ‘World’s Greatest Half Marathon’ and less than 500 spots available for the non-elite race, runners are encouraged to register online and claim their spots immediately.

Organised by Ras Al Khaimah Tourism Development Authority (RAKTDA) and RCS Sports and Events, the Ras Al Khaimah Half Marathon attracts thousands of elite and amateur runners from the UAE and internationally. The previous edition of the race welcomed more than 5,000 participants. For more information, race registration and the full list of elite athletes confirmed for the race, please visit https://www.therakhalfmarathon.com

Renew your PO box subscription today for a seamless experience