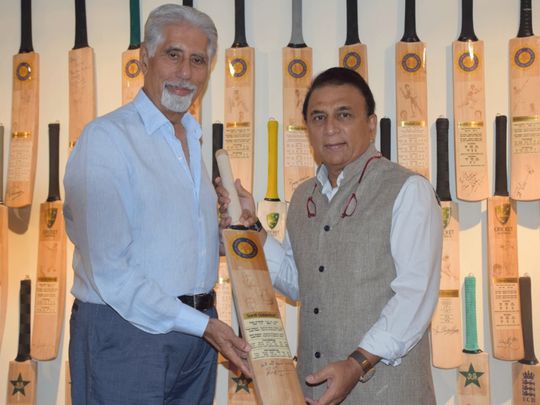 Dubai: The Shyam Bhatia Cricket museum, a treasure trove of invaluable belongings of legendary cricketers and for any student of the game, has completed 10 years this month. Bhatia, who worked tirelessly on this unique museum for it to stand out as among the best privately managed museums in the world, takes everyone on a nostalgic journey down memory lane of cricket.

All cricketers and officials, who have visited this two-storeyed museum located within the premises of his Dubai residence, have been amazed by his collections and effort and left glowing messages.

Speaking to Gulf News in an exclusive interview, Bhatia said: “During the 80s, when the Cricketers Benefit Fund Series (CBFS) used to be held in Sharjah, I used to host dinner parties for all the teams. As a result, I had a rich collection of pictures of all the greats and gift items from some players. By 2004, I created a cricket gallery at home and stored these items there. Because I was so passionate about cricket, I began to travel extensively to watch some of the games and have watched all the World Cup final matches.

‘‘Cricketers who used to visit my house became my friends and they would often give me some of their valuable personal items, which then demanded a bigger place. Then with the permission of the Dubai Municipality, I built a two-storeyed structure within my residence premises and on April 10, 2010, it was inaugurated in the presence of all Directors of the International Cricket Council (ICC).”

News of Bhatia’s collections spread around the world and now, the building is overflowing with cricket memorabilia. The walls of the museum are adorned with the history of cricket from 1887 till now and there are designed ‘pillars’ for all Test-playing nations describing their history. Separate areas are dedicated for the 10,000-plus Test run-getters and the history of the 12 cricket World Cups so far.

There are over 2000 cricket books and magazines dating back to 1900, autographed cricket bats and prized possessions gifted by greats of the game.

Recalling the first gift he had received, Bhatia said: “It was Sunil Gavaskar who presented me with one of his bats, and from there on it began. I was overwhelmed to receive Viv Richards’s blazer. Graeme Smith gifted the boots with which he played his 100th Test match and there are many more such precious memorabilia,” said Bhatia, who also hosts the annual Bhatia awards for excellence in cricket in front of the museum.

“Pakistan skipper and present Prime Minister Imran Khan, during his visit here, keenly went through every item and was even amazed to read about his own feats recorded clearly. A few years ago, Gavaskar used almost all adjectives to describe this museum. Zaheer Abbas’s remark that it is the best cricket museum he has seen, was a big boost. After his first visit, Kapil Dev had mentioned that he would love to come back to this place. He has kept his word and dropped by the museum many times,” said a proud Bhatia.

Bhatia now feels the museum needs more space, so that he can leave a legacy for the future. “I was working closely with the Dubai Sports Council and Dubai Arts and Culture Authority to shift this museum to Meydan Mall in Nad Al Sheba when the COVID-19 pandemic delayed all plans,” Bhatia added.

Entry is by invitation only. Interested persons may write to [email protected] for permission.

Large groups of people by Ilkley river during UK lockown