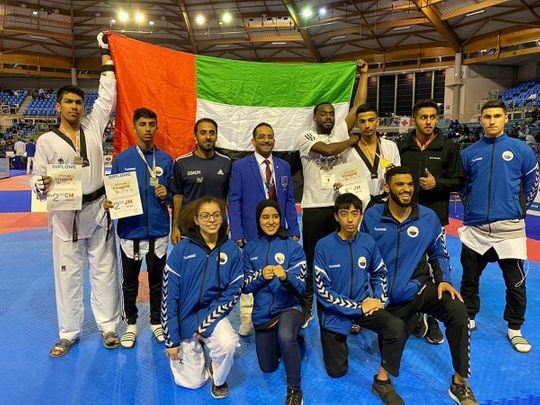 Paris: Young Taekwondo players from Sharjah Sports Club showed their impressive sparring skills at the international arena and won three medals for the UAE at the prestigious French Open Taekwondo Championship held in Paris this month.

Around 1100 Taekwondo players from around the world competed at the event.

Sharjah players won a gold and two silver medals under the supervision of Abdullah Hatim, UAE National Team Coach and Technical Director at Sharjah Sports Club. Sharjah players have already lifted the trophy in the UAE National Championships this year.

Sinan who represented Pakistan National Taekwondo Team, beat Russian player Pavel Mironov in quarter final and the Spanish player David Rodrigues Garcia in the semi-final. However, he lost to another Russian player Ivan Skudrit in the final. More than 1100 players from around the world participated in one of the biggest Taekwondo events in the world.

Sinan is the first Pakistani player in the cadet category to win medals for Pakistan in Europe. Sinan’s next target is the Junior Taekwondo World Cup to be held in October next year in Belgium. Sinan is also a high performing student at the North American International School (NAIS) in Dubai.

Speaking about his success in Paris, Sinan said that he was happy to get silver medal for Pakistan in French Open though he wanted to have gold. “I am working hard and hope to bring more medals for Pakistan at international competition,” he said.

Sinan’s coach Abdullah Hatim commended Sharjah Sports Club players' performance considering that French Open is one of the toughest championships in the world. He said the players are gradually improving their skills and are now ready to compete at any international competition.  Sinan also trains at the Sharjah Sport Club with coach Hatim.

Colonel Waseem Ahmed, President of the Pakistan Taekwondo Federation (PTF), said that he was very happy to get medal at the French Open. “He is special because he chose to play for his country despite being an expatriate. We hope he would bring Pakistan honours at upcoming international.

Sinan is younger brother of Ammar Ashfaq Ahmed, who represented Pakistan at the Junior World Cup last year, Asian Taekwondo Championship in Jordan this year and also played a number of other international events for Pakistan.

Taekwondo is one of the official medal sports at the Olympic Games since 2000, and it is a sport played by more than 80 million people worldwide.