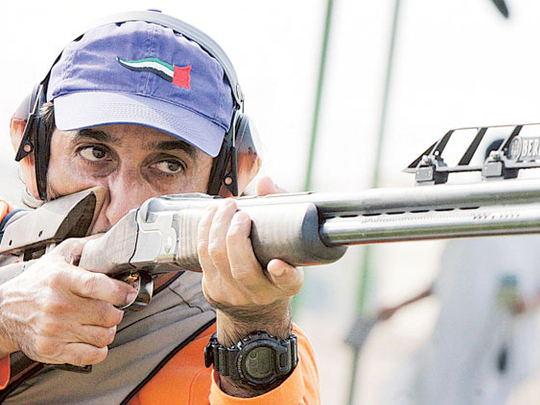 Shaikh Ahmad, who was the undefeated UAE squash champion from 1985 to 2000 before switching on to double trap shooting, said: “I am deeply saddened by the passing away of such a great squash player. He was such a giant of the sport in general.

“I have grown up watching the exploits of legends such as Azam Khan, who came a generation before me. Then I had the good fortune of dealing first-hand with some of the other top squash players, especially from the Khan dynasty [Jehangir, Jansher] and of course Abbas Khan who was my coach during my success in squash. When such a great player passes away, the entire sporting world comes together to mourn such a loss,” Shaikh Ahmad said.

Shaikh Ahmad started serious shooting only in 1998, although he had joined his father during falcon hunts from a very tender age of four. Then on March 15, 1998 he officially announced he would be moving off from squash and start taking up shooting so that he could win an Olympic medal for the UAE.

Six years later, he not only won the double trap gold at the 2004 Athens Games, but also equalled the Olympic record in the bargain. He landed in Dubai to a hero’s welcome where he was felicitated on arrival by His Highness Shaikh Mohammad Bin Rashid Al Maktoum, Vice President and Prime Minister of the UAE and Ruler of Dubai.

“My prayers and thoughts are with the family of Azam Khan. May Allah grant him eternal rest in his kingdom,” Shaikh Ahmad added.