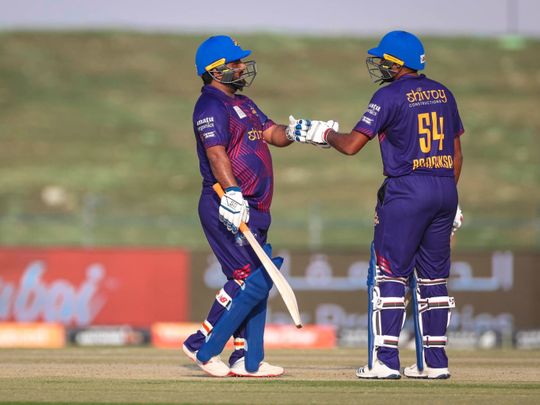 Abu Dhabi: Afghanistan’s hard-hitting opener Mohammad Shahzad served a notice to the selectors with a breezy knock of 57 to steer Deccan Gladiators to a 24-run win over Qalandars in the Aldar Properties T10 Abu Dhabi T10 tournament at the Zayed Cricket Stadium on Tuesday.

Shahzad, whose effort came in 21 balls (six sixes and three boundaries), has been at loggerheads with his board and had even been suspended for a year from August 2019 for a breach of board’s code of conduct. The jovial Shahzad said after the match: “This knock is very good for me because people are watching me back home and here as well. It can be very good for me to come back to the Afghanistan team. This is my job and wherever I go, I will try and perform.”

Shahzad was dropped on six off the bowling of Afghanistan teammate Mujeeb Ur Rahman, who played for Qalandars. Commenting on his luck factor, Shahzad said: “It is part of the game. I know Mujeeb’s strength, the first ball I hit him for six, next ball my catch got dropped and it is very good for me and for my team. That was turning point for me and my team.”

Qalandars captain Dawid Malan had hit an unbeaten 49 along with Phil Salt (25 not out), but they could muster only 104 for two in reply to Deccan’s 128 for 4 in 10 overs. When asked on how tough it was to set field for Shahzad, Malan said: “It is tough because if you bowl outside the off-stump, he hits for a four or a six on the offside and if you bowl it straight, he hits you on the leg side and if you bowl too full, he hits you straight. So, he’s quite tough. Usually, batsmen favour one side but he has got this ability to hit on both sides when he’s going strong and he plays spin exceptionally well.”

Though Shahzad makes life difficult for bowlers, he feels the T10 is a tough format. “In T10 nothing is easy — everything is going on very fast. I love T10 because it is very fast cricket and you need to take decisions very quickly. Batting, bowling, fielding … nothing is easy in T10.”