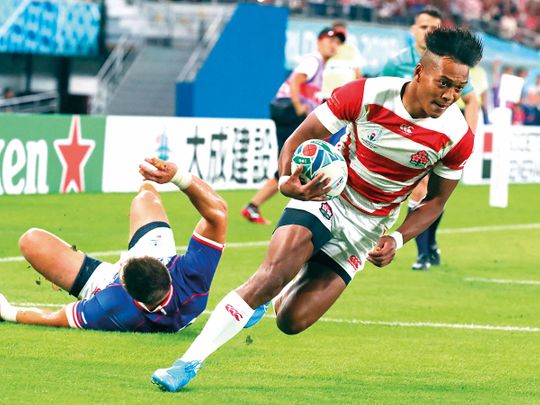 Dubai: Kotaro Matsushima was the toast of Japan as his hat-trick helped the host nation recover from a stuttering start to their Rugby World Cup campaign and win 30-10 against Russia to send the throngs of Japanese fans home from Tokyo Stadium delighted.

Following a glittering opening ceremony, Japan took to the field amid roars of encouragement from the crowd, but both players and supporters alike were in stunned silence when the unfancied Russians opened the scoring inside five minutes.

The Brave Blossoms looked to have caught stage fright in their the Pool A clash as Russia started much stronger, determined not to be outclassed in the hostile den of their opponents.

Yu Tamura saw his clearance kick charged down as Russia piled on early pressure. The hosts repelled that attack, but once again the Russian ‘Bears’ came again and Will Tupou spilt a high catch, allowing Kirill Golosnitskiy to trot over for the opening try of the tournament.

“Straight from the kick off they put us under extreme pressure with their gameplan, they really tested us today,” said Japan captain Michael Leitch.

“I think with the nerves out of the way, we can start looking forward to (their next game against) Ireland.”

The hosts dusted themselves down and soon got down to business, giving an expectant crowd the lift they were looking for when Tupou made amends in the 11th minute with a reverse pass for Matsushima to dive into the corner.

Russia held their own for most of the first half, but Japan’s fitness levels began to tell as half-time approached and Ryoto Nakamura found Matsushima out wide to give the home side a 12-7 lead at the break.

A Kushnarev penalty closed the deficit to 20-10 on the hour-mark but Tamura kicked a three-pointer before Matsushima completed his hat-trick with a superb solo effort that left a number of Russians trailing in his wake.

Japan were once regarded as whipping boys on the game’s biggest stage but they are a force to be reckoned with these days and will look to take a bigger scalp when they face Ireland and Scotland later in the pool stages.