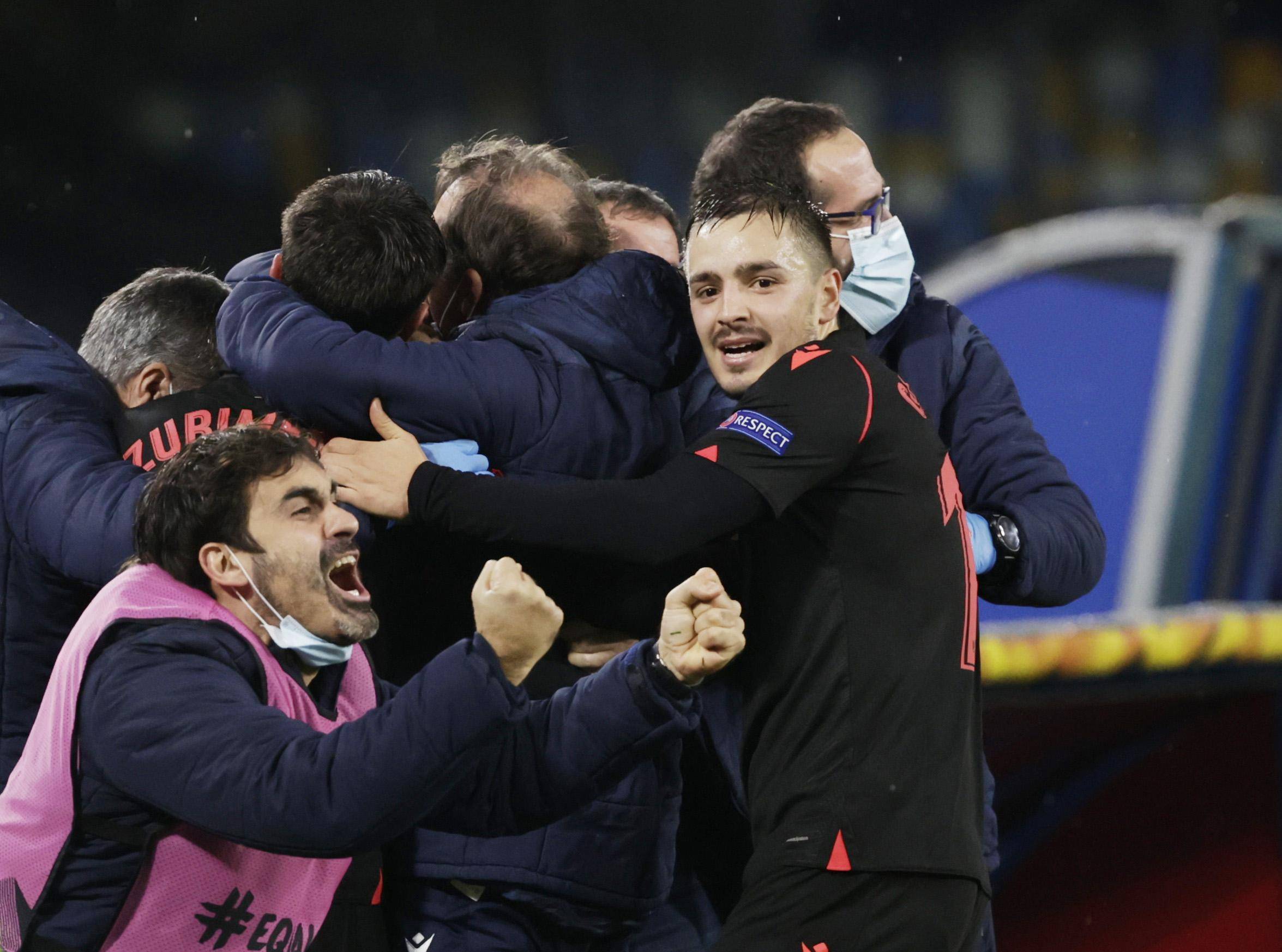 Real Sociedad snatched qualification for the last 32 of the Europa League in the final seconds on Thursday after Willian Jose's late leveller in a 1-1 draw at Napoli and AZ Alkmaar's shock 2-1 defeat at Rijeka allowed the Spanish side to progress.

Young Boys, Molde, Wolfsberg and Maccabi Tel-Aviv rounded off the group stage by making Monday's draw in Nyon, where they join the 18 already-qualified teams and will be met by eight drop-outs from the Champions League.

La Liga high-fliers Sociedad were heading out of Europe as the final two matches of Group F headed into stoppage time, with Alkmaar set to go through in second place as the Dutch side were drawing at bottom side Rijeka and Napoli led in Naples thanks to Piotr Zielinski's fine first half strike.

However Jose's thumping finish to level the scores at a soaking Stadio Diego Armando Maradona put the Basque outfit back into second place, and Ivan Tomecak's 93rd-minute winner for Rijeka in Croatia confirmed Alkmaar's elimination.

Napoli finish top of the group on 11 points, two ahead of Sociedad in second who end the group stage a further point ahead of Alkmaar.

"I am happy, but the result was more important than who scored tonight. We achieved qualification and that is why we are all happy," said Zielinski.

Gennaro Gattuso's side knew that despite racking up 10 points in their previous five matches a defeat could cost them qualification and he started a strong team that was still missing injured forward Victor Osimhen.

Sociedad meanwhile needed to match Alkmaar with the pair level on eight points and in the absence of attacker Mikel Oyarzabal missed a host of chances early on.

Zielinski punished Sociedad for these misses when he opened the scoring against the run of play in the 35th minute when he classily brought down a clearance from a corner and lashed home a powerful finish.

However Jose sparked wild celebrations when he span and hit his shot into the roof of Ospina's net with seconds remaining, sending his team into Monday's last-32 draw.

Young Boys also qualified in dramatic fashion in the last round of group matches, on a night when iconic Italian striker Paolo Rossi was remembered across Europe after his death late on Wednesday night.

A 93rd-minute penalty from Jean-Pierre Nsame and Gianluca Gaudino's strike three minutes later sent the Swiss side through alongside Group A winners Roma with a 2-1 win over Cluj that also featured three red cards.

Cluj are out of Europe thanks to the two stoppage-time strikes, which came after Gabriel Debeljuh had put the Romanians provisionally second in the group with just six minutes remaining in Bern.

Wolfsberg are through to the knockouts thanks to a 1-0 win over Feyenoord which also knocks out the Dutch giants.

Former European champions Feyenoord needed a win in Austria to leapfrog their opponents into second place but were disappointing all night and never bounced back from Dejan Joveljic's 31st minute opener.

Maccabi went through behind Group I winners Villarreal thanks to a 1-0 win over Turkey's Sivasspor, who are eliminated.

Molde's 2-2 draw with Rapid Vienna was enough to see them through from Group B in second place behind Arsenal.

The Gunners finished the group stage with a perfect six wins from six after easing past bottom side Dundalk 4-2, while Rangers finished top of Group D thanks to their 2-0 win at Lech Poznan.

AC Milan continued to show that they don't rely on injured Zlatan Ibrahimovic after a 1-0 win at Sparta Prague that allowed them to snatch first place in Group H.

Jen Petter Hauge's fine individual goal midway through the first half took the Serie A leaders to 13 points, two ahead of Lille who lost 3-2 at bottom team Celtic.

Europa League results on Thursday, the final round of group games: