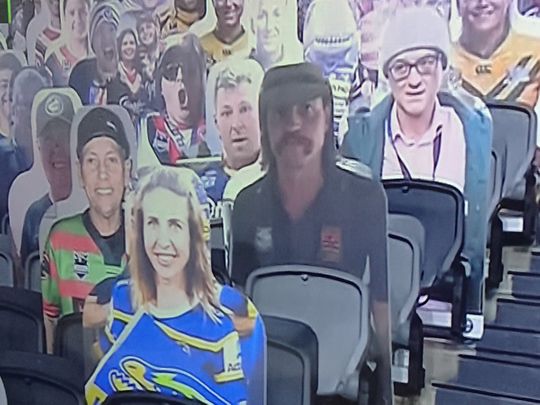 A feel-good campaign allowing fans to have cardboard cut-outs of themselves at rugby league games in Australia has been hijacked by pranksters, with a notorious serial killer and Adolf Hitler among those making an appearance.

The National Rugby League launched “Fan in the Stand” to coincide with the sport’s return last weekend after its season was put on hold due to the coronavirus pandemic.

Supporters are barred from stadiums under strict health protocols, but can pay Aus$22 (US$15) to have their photo printed on a life-size cut-out and placed in the stands of their team’s home venue.

While most played by the rules, eagle-eyed TV viewers spotted some anomalies as cameras panned over the fake fans, including a dog and another showing British Prime Minister Boris Johnson’s embattled top aide Dominic Cummings - while one TV show edited an image of Adolf Hitler into the crowd.

Cummings sparked a political scandal when newspapers discovered that he left London and took a cross-country trip to stay on his parents’ property during a strict coronavirus lockdown in Britain.

But it was a cut-out of infamous serial killer Harold Shipman, known as Dr. Death, at Sunday’s clash between the Penrith Panthers and Newcastle Knights that caused concerns.

Shipman was an English doctor who in 2000 was found guilty of murdering 15 patients, although he is widely believed to have killed more than 200.

Some found it amusing, but others did not.

In a statement to Australian media, the NRL said: “We are reviewing the vetting process for Fan In The Stand. The weekend was a trial run and trials are designed to iron out issues.”

Broadcaster Fox Sports, meanwhile, apologised after one of its television shows photoshopped an image of Hitler onto one of the cut-outs, sparking condemnation for its "stupidity" from the Australian Jewish community.

"The segment on my Fox League show on Sunday in which we showed an image of Hitler in crowd cut-outs was in poor taste and completely inappropriate," said the show's host Matty Johns, a former Australia international.

"I acknowledge it was wrong and I apologise to our viewers and to everyone in the community who is rightly concerned and offended by the segment."

Dubai is taking a back in business approach on opening up

How an entire Filipina family, struck by COVID-19, coped in the UAE

The much-awaited first look of Prabhas' next titled 'Radheshyam' is finally here!

Bhumi Pednekar is enjoying her time in isolation