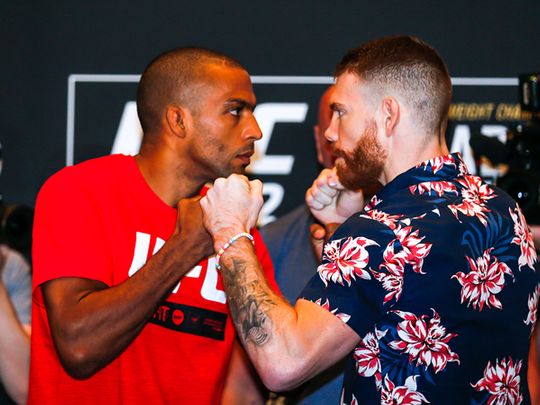 Abu Dhabi: In the end there will be just one man standing when Edson Barboza and Paul Felder square up for their rematch as The Arena waits to host UFC 242 on Saturday.

The bout between Felder and Barboza will be the highlight on the main card during the build-up to the Khabib Nurmagomedov vs Dustin Poirier bout to be held on Yas Island this Saturday.

The two fighters came along and gave journalists from around the world a peek into their world at the customary Media Day held at Yas Hotel, on Thursday. And as the two walked off — both with a solemn promise of going “only for a win” — one could feel the sense of purpose.

“I want to come out with something new for him [Barboza], something that he has not yet seen, something unexpected,” the 35-year-old American fighter Felder told Gulf News.

“Most of them [other fighters] have been keeping busy visiting the beach, the park, the city. But for me, I prefer to stay put in my room and see the beach from my balcony. I don’t want to get sunburn before such a big fight.”

A professional since 2011, Felder has also competed for the Cage Fury Fighting Championships before changing to the UFC fold where he is currently ranked No. 10 in the UFC Lightweight Rankings. Felder faced Barboza on July 25, 2015 at UFC on Fox 16, replacing an injured Myles Jury. He lost the fight by unanimous decision, thus necessitating Saturday’s rematch.

“No doubt, Edson is a great kicker, and he is more experienced now than then [2015]. But, I’ve added a few strings to my bow as well. For sure, he will be slippery and he will be here with a lot of power. But the real thing will be ultimately seen on Saturday,” Felder said.

Currently ranked No. 7 in the official UFC Lightweight Rankings, Barboza professional MMA career began in April 2009 in Tampa, Florida, where he defeated Aaron Steadman via Technical Knockout in the first round. Barboza then defeated Lee King in the Renaissance MMA promotion, claiming the lightweight title via second-round KO. He defended the belt against King later that year, winning via submission in the first round.

Since then, the Brazilian native from Novo Friburgo, Rio de Janeiro has come a long way boasting a win-loss record of 20-7. “For me this is going to be a complete fight, where both of us have evolved as fighters. Four years is a long time and both of us have experienced more of life, and that to me can make a lot of difference in the outcome on Saturday,” Barboza admitted.