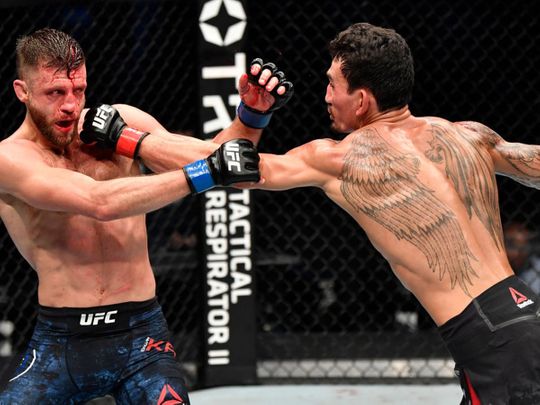 Dubai: After heartbreaking losses to UFC featherweight champion Alexander Volkanovski, former champing Max Holloway stormed back into title contention when he put on a masterclass to overwhelm Calvin Kattar at UFC Fight Island 7 early on Sunday morning in Abu Dhabi.

Holloway totally dominated Kattar from the start of the five-round contest and left him bloodied and half the man that he was at the final bell.

He punished Kattar with every aspect of the MMA game from punishing punches, uppercuts, cracking elbows and deafening body shots to win a lopsided fight with the three judges scoring the fight 50-43, 50-43 and 50-42.

The performance left nobody in doubt that the Hawaiian was back to his best and deserves a third fight against Volkanovski.

Fellow fighters took to Twitter to express their admiration for Holloway, who has fought and beaten some of the best featherweights in the world.

Here are some reactions: