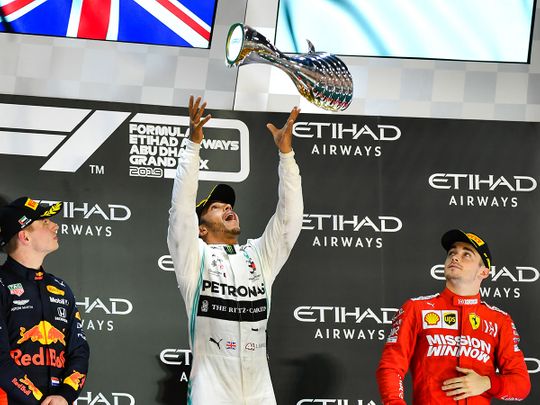 Abu Dhabi: Six-time world champion Lewis Hamilton signed off 2019 on a ruthless note with a record 50th win from pole position and 84th of his career to clinch his fifth Abu Dhabi Grand Prix trophy at the Yas Marina Circuit on Sunday.

After taking an 88th pole in Saturday’s qualifying — double that of his car No. 44 — there was no stopping the faster and quicker Mercedes as the 34-year-old completed his 11th win this season nearly 17 seconds quicker than Red Bull’s Max Verstappen, while Ferrari’s Charles Leclerc kept the second Mercedes of Valtteri Bottas at bay.

“Today is such a happy day for me personally. And to see all these people from across come here and cheer us on, inspires me,” Hamilton said after collecting an additional point for fastest lap to take his total to 413 points.

“We wanted to keep our head down and try to learn from this beautiful car. There a lot of youngsters coming through right from the second to seventh or eighth places, and I am simply proud to be part of this moment. I am looking forward to them getting closer to us next season.”

Starting on the medium tyres, it was certain Hamilton was in for a single pit-stop strategy as he got off to a quick start speeding down the first corner ahead of Verstappen, while Leclerc managed to take second on Turn 8 ahead of Verstappen and teammate Vettel in a fairly clean squabble.

Bottas didn’t have too much of an issue pushing his way through traffic to be in 14th — having started at the back due to engine changes — by the end of the fourth and then into eighth by the 11th lap. Vettel pitted on lap 13 to change to hard tyres, but a rather long pit stop of nearly seven seconds cost him precious time as Verstappen chased down Hamilton followed by Leclerc.

Finally, when the DRS was enabled on the 18th lap, it was Bottas nestling into fourth behind leader and teammate Hamilton, followed by Verstappen and Leclerc even as Vettel threatened to attack from fifth. Hamilton, meanwhile, continued at his merciless best in front, and at one point established a healthy 14.7 seconds lead from the chasing red of Leclerc and Verstappen’s Red Bull midway through the race.

Ferrari’s Leclerc pitted for the hard compound and this paid instant dividend as he set the fastest lap at that point of race. But exactly midway through the race, Mercedes responded bringing Hamilton in, and despite the slow stop, the Briton still came out leading by more than six seconds from Leclerc, never to look back.

Verstappen, who had complained of issues with his car over radio, walked away satisfied following his career-best third overall in the drivers’ standings. “We had to go in for a different strategy, but luckily our pace was pretty decent,” Verstappen said.

“It’s been a long and hard season and we’ve all be working hard. Now it is time to be with family and friends, recharge and come back stronger next season.”

Leclerc, who finished fourth in the season standings with a total of 264 points, was thankful for the lessons learnt through the season. “It has been a huge period of growth for me, both personally and as a professional. Being with the Ferraris is a moment I had dreamt about since I was a child,” he said.

“The next season will be a time to up my game and get better and more competitive.”

In total five different drivers have won at Yas Marina — Vettel, Hamilton, Kimi Raikkonen, Nico Rosberg and Bottas — with Hamilton now clearly the most successful with five triumphs in the UAE capital.

Three world champions have been crowned here in the past — Vettel 2010, Hamilton 2014 and Nico Rosberg 2016 — unlike this year where both the drivers’ and teams’ championships had been settled before arriving in Abu Dhabi.

This year also marked the final one for at least two drivers — Robert Kubica’s 97th race and Nico Hulkenberg’s 179th start, while Red Bull’s junior team Toro Rosso also withdrew into the background since its creation in 2006, and will be now known as Alpha Tauri from 2020.