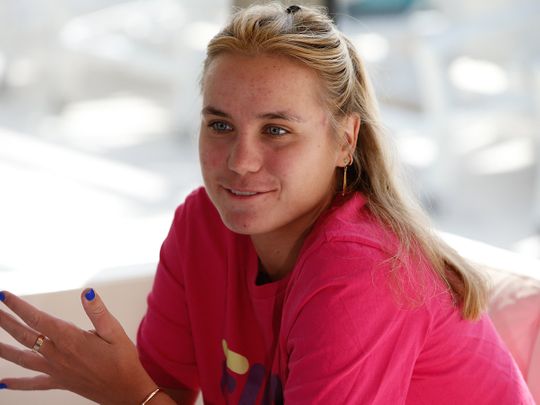 Dubai: She’s perfectly at ease at being called ‘feisty’ by the media. Sofia Kenin, the latest Grand Slam champion on the WTA after winning the 2020 Australian Open, has a thing or two to prove when the Dubai Duty Free Tennis Championships gets under way on Monday.

Kenin fought back from a set down to defeat the favoured Garbine Muguruza in Melbourne in the first week of this month. The 21-year-old became the youngest American winner at a major since Serena Williams won the 2002 US Open as a 17-year-old.

“I had that (being feisty) since I started playing tennis. I always had that. I was competitive. I hated losing. I was always crying when I was losing, even in practice. Yeah, I guess I was pretty competitive when I was a little kid,” Kenin told media on Sunday.

But that attitude comes from being self-demanding while driving towards being perfect. “There is no secret for success,” she admitted. “I am playing every match. I’m trying my best. There’s not much to hide. Game-wise I am not going to say anything because every opponent is different and besides, I cannot give tactics of what I’m doing.”

Exactly a year ago, Australian Open champion Naomi Osaka was in Dubai speaking about the pressure and the struggles a player has to go through after winning a major tournament. While that sort of pressure eventually got to the Japanese player, Kenin was keen she would do way better here this week. “Yeah, I am trying to see what each player is doing and how they handle the pressure. I think one has to learn from the best,” she said.

“Of course, they’re not going to tell you all their secrets or everyone would be Grand Slam champions and be able to sustain this level. Yeah, I’m just going to see what they’re doing. I’ve got my dad here, my agents and everything. Hopefully they can help me out and just keep the process going forward.”

Her win over Muguruza got her $2.85 million in prize money, nearly matching her $3 million career prize money before entering the Australian Open. Kenin also moved up to No. 7 in the world rankings while becoming the new American No. 1 after ending 2019 as the No. 2 behind Serena. After her Australian Open triumph, she reported for national duty where she represented the US at their Fed Cup qualifiers against Latvia last week.

“I learnt a lot of things about myself. Those two weeks really changed my life. I handled everything well, all the pressure well. Obviously different expectations now, I would say,” Kenin said.

“Now, it’s just more stuff to do. Everything is about the same. I’m still practising, still working hard. Just going to keep grinding it and hopefully have more of those good results. And hopefully, I can somehow take it easy and not let it get into my head.”

A time when traditional media counts for a lot