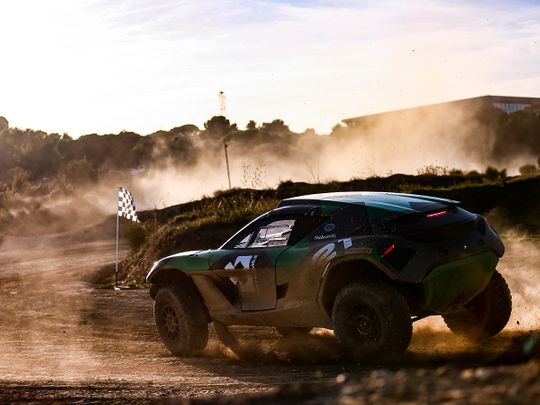 Dubai: Extreme E, the revolutionary electric off-road racing series, has outlined the race format for its five-event adventure to some of the most formidable, remote and spectacular locations across the globe, starting early 2021.

The series has devised an innovative format unlike any other, likened to a Star Wars Pod Racing meets Dakar Rally, which is designed to break the mould in motorsport with all-action, short, sharp wheel-to-wheel racing, world-class drivers and teams and the cutting-edge Odyssey 21 electric SUV.

The series will get under way with the opener in Lac Rose, Dakar, Senegal on January 23-24 before moving on to Al ’Ula in Saudi Arabia (March 5-6), the Kali Gandaki Valley in Mustang District of Nepal (May 14-15), then on to Kangerlussuaq, Greenland (August 28-29) before its finale in Santarém, Pará, Brazil (October 30-31).

“Extreme E is a championship like nothing else that has come before in sport. Its goal and objective is to accelerate innovation and tackle climate change head on using transportation,” Alejandro Agag, Extreme E Founder and CEO, related.

“Creating this innovative sporting format is vital in order to engage the next generation of motorsport fans. We hope our fans will enjoy all the features of this new brand of racing including the short, sharp, wheel-to-wheel racing this format has been built around,” he added.

Each race, which will be known as an X Prix, will incorporate two laps over a distance of approximately 16 kilometres. Four teams, with two drivers — one male, one female — completing a lap apiece in-car, will race head-to-head in each race over the two-day event.

Qualifying takes place on day one to determine the top four runners who will progress through into semi-final 1 and the bottom four competitors who will go on to take part in semi-final 2: the unique ‘Crazy Race’.

The Crazy Race will be a tooth-and-nail, all-or-nothing fight, with only the quickest team progressing into the final, while the top three will make it through from semi-final 1. The winner of the final — the fastest combination of team, drivers, car and engineers over the epic two-day battle — will then be crowned the X Prix winner.

As well as being used as platform for equality and illustrating the capabilities of electric vehicle technology, Extreme E will highlight the impact that climate change is having on its remote race locations, using a committee of leading scientists to help bring global attention to issues such as deforestation in Brazil, rising sea levels along the West African coastline and melting Arctic ice caps in Greenland.

This initial format is designed to incorporate eight teams, and can be adapted to accommodate additional entries. Teams will field one male and one female driver, promoting gender equality and a level playing field among competitors.

Another innovative feature is the Hyperdrive. This will award an additional boost of speed to the team who performs the longest jump on the first jump of each race. Hyperdrive power can be used by that team at any point in the race.

Operated in association with Formula E, the organisers of the ABB FIA Formula E Championship, Extreme E will announce further drivers, teams and partners over the coming weeks as it builds towards its start in January 2021. All further details can be found at: www.Extreme-E.com.