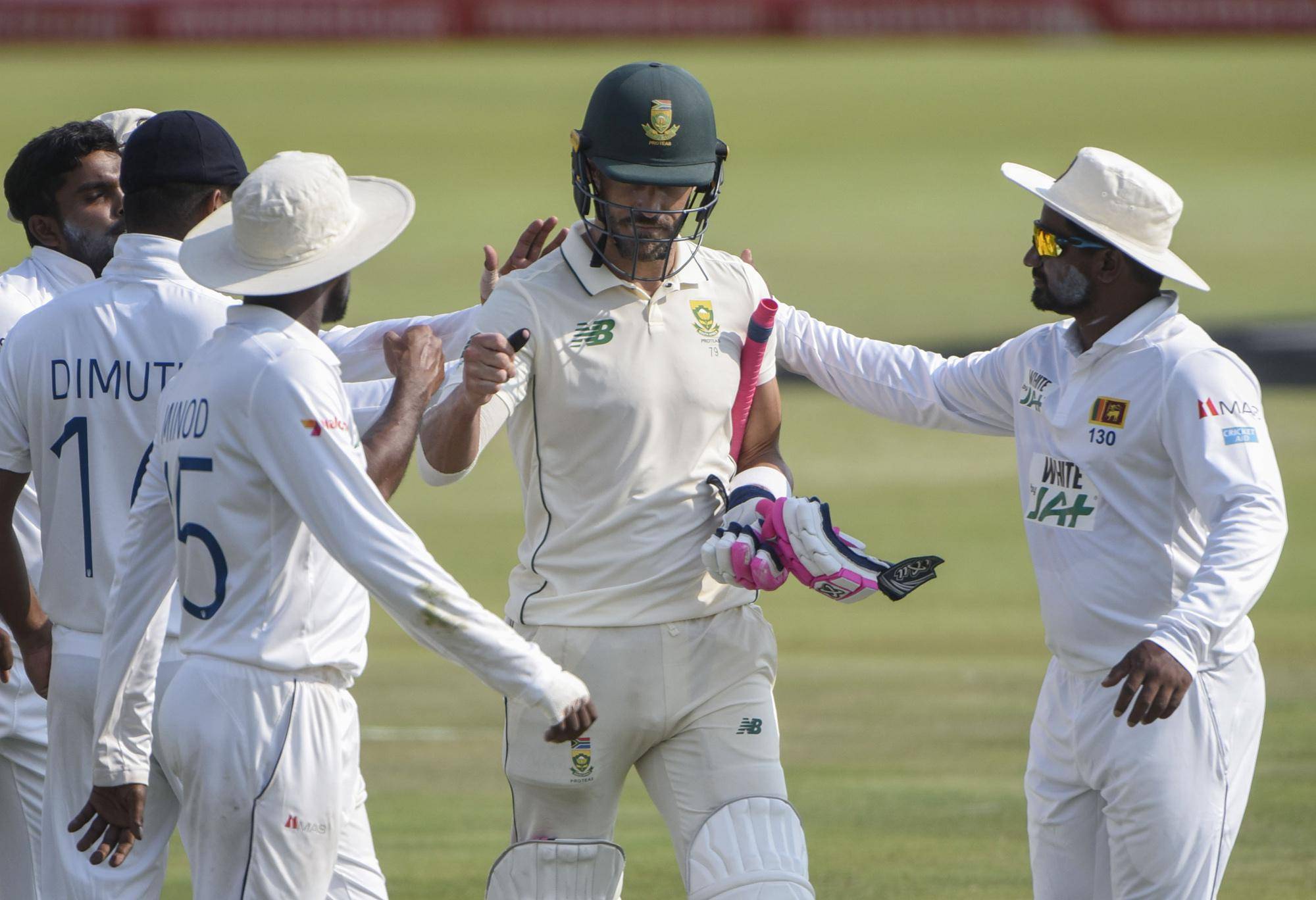 Sri Lanka lost two early second innings wickets after taking a pounding from South Africa’s batsmen on the third day of the first Test at SuperSport Park in Centurion on Monday - but batting coach Grant Flower said they were effectively five or six wickets down.

Then fast bowler Lungi Ngidi struck twice at the start of Sri Lanka’s second innings to leave the tourists on 65 for two, still 160 runs behind, on a pitch of increasingly unpredictable bounce.

Flower said batsman Dhananjaya de Silva was out of the series after suffering a torn thigh muscle on the first day, while fast bowlers Kasun Rajitha and Lahiru Kumara were unlikely to bat after suffering groin injuries while bowling.

First innings top scorer Dinesh Chandimal saw out the day in partnership with Kusal Perera but lay down near the boundary as he left the field and had to be driven to the dressing room on a motorised stretcher rather than climb the steep steps to the dressing room.

“We’re maybe six down with a groin injury to Chandi,” said Flower.

Head coach Mickey Arthur said he would use his position on the International Cricket Council’s cricket committee to discuss the possibility of injury substitutes, with injuries being more likely because of the Covid-19 pandemic.

“I will be having a chat at the end of this Test match,” said Arthur. “I saw India lost one of their quicks today and I suspect all teams will lose quicks as it goes on because the rigours of the workloads are going to be too much with Covid around and the quarantine process.”

He blamed the spate of injuries on conditioning, with players having had to train in their homes during lockdown in Colombo, then playing in the Lanka Premier League for a month until shortly before departure for South Africa.

“In terms of loads, conditioning and quarantining, I think you can throw all of them into a melting pot and every one of them probably plays a role.”

He said he hoped leading fast bowler Suranga Lakmal would be fit for the second Test starting in Johannesburg on January 3. Looking further ahead he said De Silva could miss a series against England starting in mid-January but that Angelo Mathews, who missed the South African tour because of injury, could be fit to face England.

Debutant leg-spinner Wanindu Hasaranga was off the field for part of the afternoon after falling on the ball trying to make a diving save on the boundary. But he returned to finish with four wickets, albeit at the high cost of 171 runs.

At one stage, Sri Lanka had four substitutes on the field, while captain Dimuth Karunaratne and Kusal Mendis were called into action as emergency bowlers.

Du Plessis and the other South African batsmen took advantage with a free-scoring display. Du Plessis made his highest Test and first-class score and appeared to be cruising to a double century before he tried to loft Hasaranga over his head and hit a simple catch to Karunaratne at mid-on.

Du Plessis shared partnerships of 179 for the fifth wicket with Temba Bavuma (71) and 133 for the seventh wicket with Keshav Maharaj, who made a Test-best 73.

The former captain admitted he had a point to prove after being criticised after South Africa lost a series against England last season.

“The highest tree sometimes gets the most wind,” he said. “(In) the series against England we didn’t play our best cricket and there was a lot of pressure on me as captain.”

Du Plessis said he had used the long Covid-induced break to prepare himself to be the best cricketer he could be. “It was a statement to people who might have doubted my ability to say that I can still improve.

A. Markram c Shanaka b Fernando 68

A. Nortje c Dickwella b Fernando 0

Cricket: India on track to level series as England slump in second Test