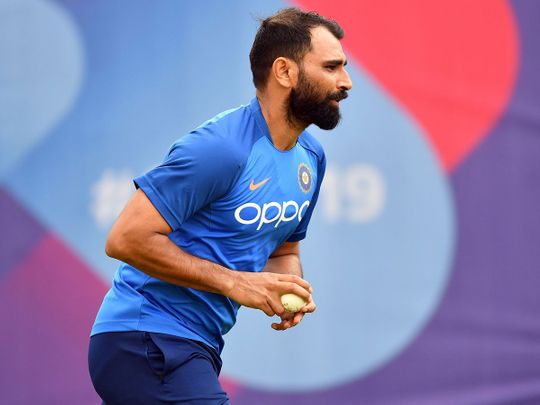 Dubai: Chetan Sharma, the only other Indian bowler to claim a World Cup hat-trick before Mohammad Shami on Saturday, is overjoyed with the abundance of pace bowling riches in the country. “Shami had been my favourite among the Indian bowlers, though the bowler I thought who could get a hat-trick any day was Jasprit Bumrah,” said Sharma, who achieved the rare feat against New Zealand in 1987 World Cup.

The mobile phone of Sharma, now 53, has not stopped ringing since Shami held his nerves for the last-over hat-trick to save India the blushes against Afghanistan in Southampton and keep their slate clean in the ongoing World Cup. “The hat-trick seems to have refreshed people’s memories about my feat as I have been speaking to the media since Sunday. The new generation may not remember me that much — or may have heard about me as the bowler who was hit for a last-ball six by Javed Miandad in Sharjah in 1986. They will now know that the first World Cup hat-trick was taken by an Indian,” Sharma told Gulf News during a telephonic interview from India.

At five feet three inches, Sharma was quite a spunky customer who shared the new ball with the legendary Kapil Dev in the mid Eighties till the early ‘90s, playing in 23 Tests and 65 One-day Internationals. His victims during the hat-trick over was Ken Rutherford, Ian Smith and Ian Chatfield.

“Shami’s hat-trick is of great significance as it ended a long drought of 32 years for India while eight more hat-tricks have taken place in between,” Sharma said, before adding: “It’s heartening to see so much of competition among quality pace bowlers for a place in the playing XI. While it was unfortunate for Bhubaneshwar to go out with an injury, but he now has to wait for his place in the light of Shami’s performance.”

Showering praise on Shami for his comeback after a battle with fitness and troubled personal life, Sharma said: “We both are right-arm fast bowlers and both got the leg stump uprooted to get to our hat-tricks. I really like way he approaches the crease and his upright seam position is the best among our bowlers — it carries in the same fashion to the wicketkeeper.”

Asked for his take on fast bowling resources available now in comparison with his days when Kapil would be bearing the beast’s burden with Sharma and later Manoj Prabhakar, he said: “You need bowling strength to win matches and that’s why India are now winning Test matches in England, Australia and South Africa. Batting had been traditionally our strength but the bowling is making a lot of difference, especially abroad.”

Sharma, however, feels that the proliferation of franchise leagues and a lopsided schedule of white ball cricket has not helped in the growth of fast bowling greats like the all-rounder trio of Kapil, Imran Khan and Richard Hadlee or thw two ‘W’s of Pakistan. “There is simply too much money in T20 leagues now as it becomes difficult for the players to ignore it — and the strategy there is all about saving yourself from getting hit. The bowlers thus focus on yorkers, back-of-the hand slower ones etc and not hone the art of swing, playing on the batsmen’s patience to pick up wickets,” he added.