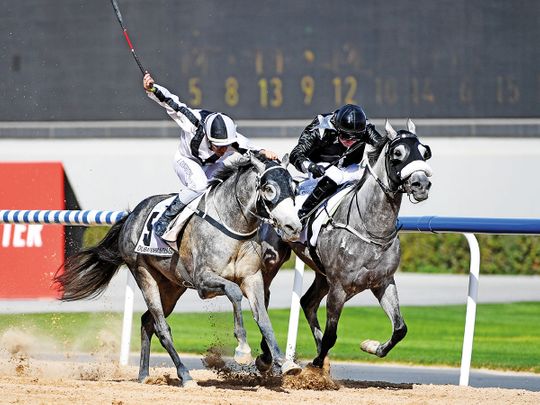 Dubai: In another world, a world we knew not so long ago, Saturday, March 28 was expected to be a very special day for Dubai.

It was a day that would mark the 25th Anniversary of the $12 million Dubai World Cup, the second richest race on the planet and one of the most sought after prizes in the horse racing world.

Nine races worth a cumulative purse of $35 million was up for grabs in nine glittering races spread over a day-night race meeting like no other.

Sadly, it was not to be.

The deadly coronavirus has taken from us a piece of history, a momentous event that hundreds of thousands had been eagerly looking forward to attending or watching from their homes in over 150 territories.

More than one billion viewers tuned in to watch the 2019 running of the race and its supporting events last March and the numbers were expected to exceed those given the fact that this was a landmark year for the race that was created by the visionary His Highness Shaikh Mohammad Bin Rashid Al Maktoum, Vice President and Prime Minister of the UAE and Ruler of Dubai, as the definitive “world championships of flat racing”.

For seven-time UAE champion jockey Tadhg O’Shea, Saturday, March 28, was supposed to be the day he had been waiting for all his life. The talented Irish rider, who hails from Dromahane in County Cork, Ireland, was booked for five exciting rides across the nine races, with a dream, first-ever appearance in the $12m Dubai World Cup (Group 1).

Speaking to Gulf News from Ireland, O’Shea — who rode his first UAE winner aboard Danidor in 2001 — said: “It’s obviously nice to be back in Ireland with my family in what can only be described as crazy times in the world with the COVID-19 pandemic.

“From a personal level I am very, very disappointed that I couldn’t be participating at Meydan today on what was supposed to be the biggest day’s racing there. But everybody’s health and well-being comes first and foremost,” he added.

“I was really looking forward to my busiest day today with five rides led by AF Maher trying to retain the crown in the Kahayla Classic and my first ride in the Dubai World Cup.

“Hopefully we’ll come back stronger and better next season. We have only been home a week and we are already looking forward to returning to the UAE for the next season.

“I want to wish everybody to be safe, happy and healthy over the next few months and look forward to meeting up with everybody again soon.”

Yasir Mabrouk, the Dubai Racing Club’s veteran racing administrator, Master of Apprentices and Clerk of the Course, would have been one of the busiest men at Meydan had the Dubai World Cup meeting gone ahead as scheduled.

His role on Saturday would have been the same as it was since the first Dubai World Cup in 1996, checking if the riding weight of each and every jockey was correct.

“Every last Saturday in March for the last 24 years, Dubai has been at the epicentre of world racing,” Mabrouk told Gulf News.

“It’s a bit like a wedding party. Everybody gets excited, dresses up and become part of the celebration at Meydan. But unfortunately we couldn’t have it this year, for a bad reason.

“But safety comes first and a good decision has been made to cancel the event,” he added.

“Missing the Dubai World Cup is hard because I have a part of it for so many year, 24 in all. But I have a lot of memories, most of them good and I’m sure that this one as well with turn out to a good one once we’ve all come out of this terrible situation.

“I just was to encourage everyone to stay at home, stay safe and blessed by what this country has done for us to keep us out of harm’s way.

“We will have a better World Cup next year. For sure.”