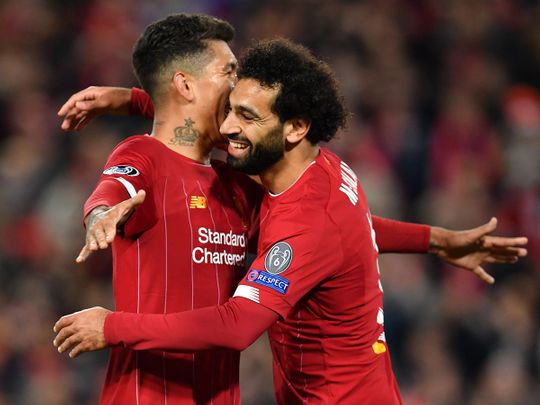 Liverpool: Liverpool survived a huge scare to get their Champions League defence back on track as Mohamed Salah scored twice in a thrilling 4-3 win over Salzburg at Anfield, despite blowing a three-goal lead.

Sadio Mane opened the scoring against his former club before Andy Robertson and Salah put the holders in command inside the first 36 minutes before Salzburg bore their teeth.

Liverpool’s storied history in this competition has been littered with famous comebacks from 3-0 down, but the shoe was nearly on the other foot after half-time as Salzburg threatened an incredible recovery.

The Austrian champions’ teenage striking sensation Erling Braut Haaland was only fit enough for a place on the bench, but they still packed a punch going forward and were rewarded when Hwang Hee-Chan pulled a goal back just before half-time.

Takumi Minamino and Haaland, just four minutes after coming on as a substitute, then brought Salzburg level on the hour mark.

However, Salah had the final word as the Egyptian smashed home the winner 21 minutes from time.

Liverpool were under pressure to make fortress Anfield count after losing 2-0 to Napoli on matchday one.

Normal service looked set to be resumed as the holders roared into a 3-0 lead thanks to some slick attacking football.

The Reds are well aware of Salzburg’s pedigree of developing fine young players, and it was one of their former alumni that opened the scoring as Mane exchanged passes with Roberto Firmino before slotting into the far corner.

Another fine team move made it 2-0 as one full-back, Trent Alexander Arnold, crossed for another in Robertson to convert just his second ever Liverpool goal like a striker.

Salah was then on hand to finish from close range after Cican Stankovic could only parry Firmino’s header back into the danger area.

Salzburg have now scored 51 goals in their first 12 games this season and were given hope as Liverpool eased off the accelerator towards the end of the first half.

Minamino had already fired a warning shot that Adrian turned behind before the visitors’ fightback began in earnest.

Hwang left Virgil van Dijk on the floor as the South Korean turned inside and fired into the far corner.

Klopp was growing visibly frustrated on the touchline as his side failed to cope with Salzburg’s pressing and incisive passing through midfield and even the German could not find a solution at half-time as Salzburg came out flying.

The second Salzburg goal was coming and finally arrived when Minamino volleyed in from Hwang’s cross.

Haaland, who scored a hat-trick on his Champions League debut in the 6-2 thrashing of Genk on matchday one, was then introduced and instantly offered an even more direct threat.

The Norwegian should have scored when he fired into the side-netting with just Adrian to beat, but moments later the 19-year-old tapped in at the back post after a purposeful break from the impressive Minamino.

Anfield was shocked, but not silenced and the home fans helped rouse the Liverpool into a response of champions.

Salah was quickest to react to a Firmino knockdown inside the area and smashed past the onrushing Stankovic to restore Liverpool’s lead and secure a vital three points.