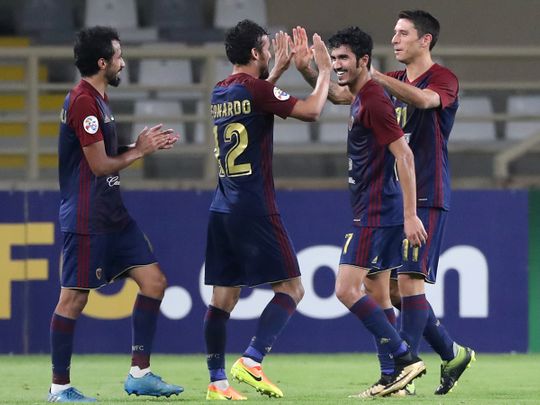 Dubai: Al Wahda and Al Nasr kept up their resurgence towards the top with clinical wins in Round Six of the Arabian Gulf League (AGL) on Friday.

Al Wahda banked on a brace from Carlitos Lopez to get the better of Al Dhafrah 3-1, while Alvaro Negredo was once again the star with the only goal of the match in Al Nasr’s 1-0 win away in Khor Fakkan.

Al Wahda had the most bizarre start to the season with a solitary-goal away loss to Fujairah. They recovered for a 3-2 home win against neighbours Al Jazira before slipping to successive defeats against Bani Yas and Al Nasr. However, last week the Clarets fought back from a two-goal deficit to win 4-2 in Ajman, and Friday’s win takes them to nine points and in the upper half of the 14-team standings.

On Friday, Al Wahda opened in the sixth minute when a dainty Mohammad Menhali chip off a Sebastian Tagliabue pass was allowed as goal following consultation with VAR. The home side doubled the score in the 39th minute through a Lopez penalty, only to see Al Dhafrah pull one back two minutes from half-time when Masoud Sulaiman’s low diving header found the far corner of Mohammad Al Shamsi’s goal.

The second half was more even with Al Dhafrah enjoying better possession of the ball. But it was the home team adding a third goal in the 68th minute when Lopez outjumped his marker to head in a cross from Menhali to deservedly take full points for a second week on the trot.

In the second early match, Al Nasr collected all three points thanks to a narrow 1-0 win in Khor Fakkan at the Kalba Stadium. After a goalless first half, it was Spanish international Negredo finding the lone goal from the penalty spot for the visitors in the 75th minute to secure full points.

Al Nasr, who had begun with a goalless draw against neighbours Al Wasl and then crashed to two successive defeats against Ajman and Al Dhafrah, had done well to secure full points against Al Wahda and Shabab Al Ahli Dubai.

On Friday, they continued this domination with nearly 70 per cent possession to return with full points from debutants Khor Fakkan.