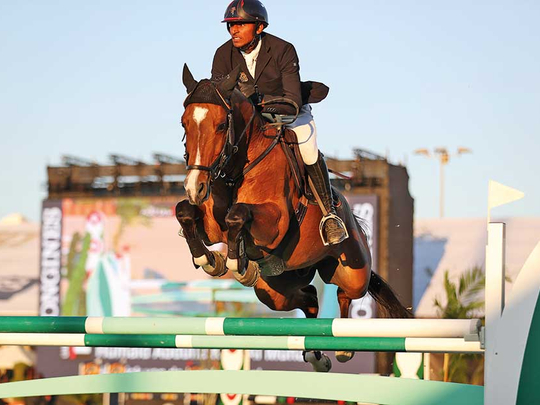 The event, which culminates on Saturday at the Sharjah Equestrian Club, is the last Arab league championship in which riders can earn qualification points for the World Cup Final.

Assessing his chances of qualifying for the Las Vegas showpiece, Al Muhairi said: “To be honest with you I’m feeling the pressure going into the event at the championship. But I have to deal with it and give my best during the event, particularly on the final day, on Saturday.

“It’s not going to be easy with many of us close on points, but I have to raise my game and perform to the best of my ability. My goal is to qualify for Las Vegas, so it’s up to me to execute strong performances this week. With a little luck, I hope to do it and win the championship as well again.”

With prize money in excess of €560,000 (Dh2.3 million) the prestigious five-star category event will see riders from 42 Arab, Western and European countries and around 400 horses in action at the club’s state-of-the art indoor arena and a open-air course.

The competition will consist of 28 rounds, 13 of which will be held in the indoor arena and 11 in the outer field. Categories include a 5-star category, 2-star category, young horses and FEI Group VII Finals.

Sultan Mohammed Khalifa Al Yahyaee, General Manager of the Sharjah Equestrian and Racing Club, who has been a strong supporter of show jumping and in particular the young riders, said: “We are excited about this year’s event, as it’s becoming bigger and better. All the jumping world has its eyes on Sharjah with so many of the world’s best riders competing here. We also hope to have some good results for our UAE riders.”

Shaikha Latifa Al Maktoum, who is the only Emirati to have participated in the Olympic Games in Athens in 2008, will also be seen in action.

The event is held in cooperation with the UAE Equestrian Federation and sponsored by official partner Longines.