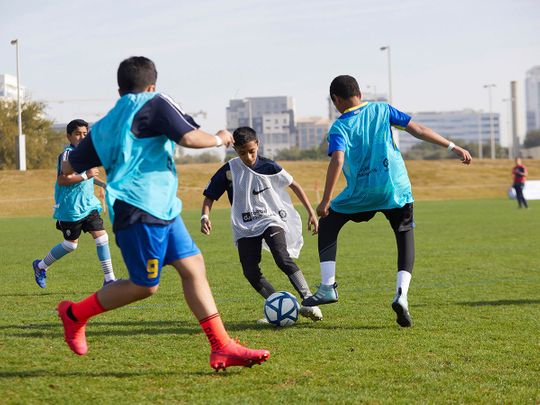 Abu Dhabi: In the final set of fixtures in the Abu Dhabi leg of the nationwide Du Football Champions (DuFC), in partnership with La Liga, there was some closely fought competition as Al Dhafra Private School and Al Manhal International Private School made it to the semi-finals of theUnder16  UAE Schools Cup that will be played in Dubai on March 7.

La Liga Scouts were on the lookout for the UAE capital’s top players to join them at the Du La Liga High Performance Centre, where they will undergo a year-round professional development programme to world-class standards.

“The Abu Dhabi leg of the nationwide du Football Champions has had a great run in our fifth season. We witnessed some excellent football from both returning and new teams. After the strong performance we saw in the Northern Emirates and now in the capital Abu Dhabi, we look forward to equally strong play from the Dubai teams,” said Iago Aguilar, du Football Champions Technical Director.

“LaLiga scouts, who have been with us throughout the Abu Dhabi leg, have also identified promising top talent who will be undergoing trials to join du LaLiga High Performance Centre – their first stop on their road to pro-football. We will be announcing the names of all top talents identified nationwide following the completion of the Dubai leg, which kicks off next week."

The UAE Schools Cup U16 teams played some of the fiercest matches to date. Al Dhafra Private School will be moving forward to the UAE semi-finals along with Al Manhal International Private School.

In the U14 category, returning team Rawafed Private School displayed intensity, speed and precision, earning them their spot in the semis, following their 5-0 win against Abu Dhabi International Private School-Campus 2.

Londoners on whether face coverings should be compulsory