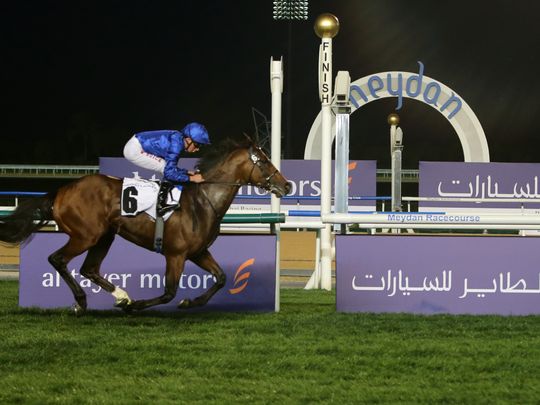 Dubai: Sheikh Hamdan Bin Rashid Al Maktoum, Deputy Ruler of Dubai and Minister of Finance, celebrated a major milestone at Meydan on Thursday evening when Waady gifted him his 900th career winner in the UAE.

The winner follows in the footsteps of illustrious sprinters owned by Sheikh Hamdan among them multiple international Group 1 winners Battaash and Muhaarar.

“I think he’s improved. It was a better performance than last week,” said Crowley. “A lot of credit must go to Doug Watson (trainer) and his team. He’s not an easy horse in the mornings. They’ve done a great job with him to come back a week later and put in a better performance.

“He’s thriving out here. At the age of seven, he’s really found his form.”

This horse surprised us all season,” added Watson. “He has natural speed for 1000m, but we will have to go back up to 1200m now, but he deserves a crack at another big prize”

That race could be the Nad Al Sheba Turf on Super Saturday, March 7.

Charlie Appleby was thinking of the history books after watching the well-bred Ghaiyyath break the track record and win the Group 3 Dubai Millennium Stakes sponsored by Jaguar in compelling fashion.

The well-muscled son of Dubawi showed plenty of speed and stamina to record a thumping 8 ½ length victory over his five rivals, breaking the course record for 2000m (turf) in the bargain.

Appleby, who has won the last two runnings of the $6million Dubai Sheema Classic (G1) with Hawkbill and Old Persian, has confirmed that the stayer’s contest on Dubai World Cup night will be the horse’s next target.

“Look, that was an impressive performance this evening,” said the Epsom Derby and Melbourne Cup-winning handler.

“He’s broken the track record and you saw what he can do when he gets in the front. He’s a relentless galloper. He’s had the run tonight so now we can hopefully work our way toward the Dubai Sheema Classic (March 28).

No trainer has won the 2,800m contest three times but Appleby must look to have a big chance of making history on the last Saturday in March during the Meydan extravaganza.

Ghaiyyath broke well under William Buick and settled into a nice rhythm at the head of the small field. Once the horses flattened for the run to it was clear that there was only going to be one winner, as Ghaiyyath displayed another set of gears and pulled away to win as he liked.

“He’s a very energetic horse and was a little bit fresh today,” said Buick. “He puts a lot into everything he does. It was an exercise where we hoped to produce and he did it well.

“He’s a hugely talented horse and like Charlie mentioned, he’s going to get a nice rest until World Cup night now.”

International bookmakers made Ghaiyyath the 5/2 favourite to win the Sheema Classic.

Appleby would complete a quick double with Zakouski who won a thrilling renewal of the Group2 Zabeel Mile Sponsored by Al Tayer Motors.

Begin your day with a gluten free banana oatmeal waffle

Covid-19: Skills that can go a long way in saving UAE employees from layoffs

Dailymotion Elevate: Wanderers- "Off My Back" live at Cafe Bohemia, NYC

Jobless rate ticks up in March, but much worse lies ahead for American workers