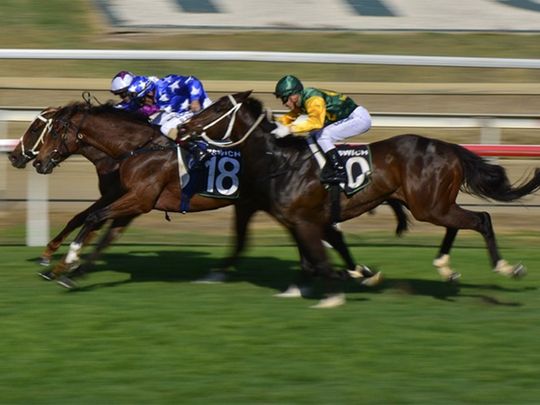 Dubai: In what is being seen as a major step in the burgeoning development of international flat racing, Saudi Arabia announced the inaugural running of the $20 million Saudi Cup on February 29, 2020, the world’s richest event, which will be run at the King Abdulaziz Racetrack in Riyad.

Slotted to be run over 1,800 metres of a dirt-track field will have a maximum of 14 runners, with the winning pocketing a staggering $10 million.

As things stand, the Saudi Cup overtakes the $12 million Dubai World Cup (Group 1) which is run at Meydan Racecourse in Dubai on the last Saturday in March as the planet’s richest horse race. It becomes the middle leg of a trio of mind-boggling races that kick off with the Group 1 Pegasus World Cup Invitation at Gulfstream Park, USA on January 25.

The inaugural running of the Pegasus Cup offered a purse of $12 million and was subsequently increased to $16 million in 2018 but reduced to $9 million in 2019.

Wednesday’s launch at Saratoga in the USA was attended by the who’s who of American racing and chaired by Prince Bandar bin Khalid Al Faisal, Chairman of the Jockey Club Of Saudi Arabia, Prince Abdullah bin Khalid Al Saud, and the race’s Global Ambassador Harry Herbert, as well as retired Hall of Fame jockey Gary Stevens.

“The introduction of the Saudi Cup as an international race is without doubt the most significant event in the history of horse racing in Saudi Arabia, and demonstrates our resolve to develop this great sport in the Kingdom of Saudi Arabia, and also our ambition to become a leading player on horse racing’s world stage,” said Prince Bandar.

Bandar added that the initial reaction to the ground-breaking event was ‘positive’.

“We’ve had positive feedback from the States, from Europe and from Japan,” he said. “We are very excited to have them excited about such a race. I think we will have to prove ourselves in the upcoming years. We understand that, but we think we have the right team and the right people. We definitely have one of the best facilities in the world. We have everything going for us.”

Officials expect to make announcements about additional races that will be added to the card in the months ahead.

“It’s not a one-race event,” Prince Bandar said. “There are several races, all with excellent prize money, both on dirt and turf.”

Phoenix Thoroughbreds’, the Dubai-based racing syndicate owned by Bahraini-businessman Amer Abdulaziz were represented by Tom Ludt who revealed that the team were committed to be a part of the inaugural Saudi Cup.

Phoenix Thoroughbreds were narrowly denied victory in the 2019 Dubai World Cup when Gronkowski narrowly went down to Godolphin’s Thunder Snow.

Herbert, consultant to the Cartier Racing Awards, said: “We know that over the last 20 to 30 years, international racing has played a key part in the development of the whole sport.

“And whenever you happen to have an international race, in Japan or in the Breeders’ Cup, or the Arc de Triomphe or Royal Ascot, and now Saudi Arabia, it brings people together.

“It is just a wonderful opportunity to show off your country, your culture, your racing heritage. I think that is just everything about our sport and nothing is more exciting, and I think from a competition perspective, it’s flying your flag.

“Representing your country, but also seeing what another country is like. I think seeing what Saudi Arabia is like is fascinating, it’s a journey and that’s what we are going on.”

COVID-19: US Open considering group flights and no fans