110,000 capacity Motera Stadium: a white elephant for the future? 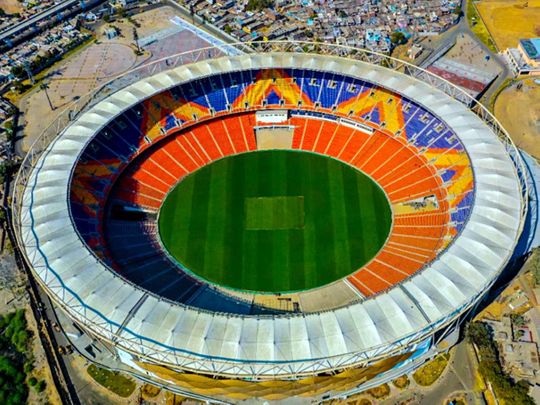 Dubai: India may be a cricket-crazy country, but there is already a question mark if the brand new 110,000-seat Motera Stadium in Ahmedabad will turn into a white elephant of sorts in future.

The so-called biggest cricket stadium in the world, which will overtake the capacity of the Melbourne Cricket Ground (100,000) once completed, will definitely provide huge brownie points to Gujarat as a tourist destination, which already boasts of the ‘Statue of Unity’ — the world’s tallest statue at 182 metres of Sardar Vallabhbhai Patel, country’s first Deputy Prime Minister facing the Sardar Sarovar Dam off Vadodara.

It’s no secret that the stadium had been a cherished project of the Prime Minister Narendra Modi since he was the Chief Minister of Gujarat and the erstwhile President of Gujarat Cricket Association - even now, Modi is parading US president Donald Trump around India and using the stadium as a rallying point.

Construction work started under the tenure of Amit Shah, currently the federal Home Minister, who was also at the helm of his state cricket body. The makeover of the stadium, according to the cricket officialdom, was necessary as the old edifice built in 1982 was behind its time — though the average cricket fan is still not sure if it demanded such a scale.

The new stadium can now host nearly double the capacity of Eden Gardens — the biggest cricket venue so far with a current capacity of 60,000 while the other ‘A’ graded venues like Mumbai, Chennai or Bengaluru can host anywhere between 25,000-30,000 people. “Motera has not been a ‘A’ venue for the Board of Control of Cricket India (BCCI), but it will become one with the increased capacity, facilities like four dressing rooms etc. It’s a welcome addition to our cricket facilities but only for major events,” Rajeev Shukla, former IPL chairman, told Gulf News over phone.

The uncomfortable question, however, remains on the number of big ticket events that even a cricket superpower like India hosts annually to justify a stadium of such capacity. There was some buzz about moving the final of IPL 2020 on May 24 may be shifted to Ahmedabad, but the official fixture maintains that the final will be held as scheduled at the Wankhede Stadium in Mumbai, the home of current champions Mumbai Indians.

The marquee matches of IPL like the opening tie, the play-offs and the final have traditionally been held in the home cities of IPL franchises like Mumbai, Chennai or Kolkata keeping their fan base and gate sales — but all that may change soon. “The IPL final in future is certainly one of the events which can go there,” Shukla said.

The BCCI top brass (read president Sourav Ganguly and secretary Jay Shah, son of Amit Shah) had been planning an IPL All-Stars game ahead of the tournament launch on March 29, but have now postponed it till the end of the IPL season at the quest of the franchises. If completed, the match can provide a suitable setting for the opening of Motera.

Otherwise, the BCCI may have to wait for the World T20 scheduled in India next year to make use of the stadium!

DO NOT PUBLISH: India's 2011 World Cup heroes: what are they doing now?