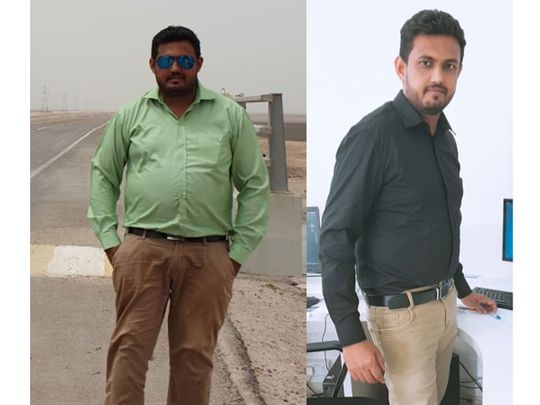 Imagine a world where you are scared to see a loved one – not because of the pandemic but because of what they may say to you. The flints of worry may ignite blind rage or leave you catatonic with shame.

This was the world inhabited by Indian Mohammad Ateequllah, who has been in the UAE for five years. He says, somewhat wryly, that he’s always been a bit lazy and fond of food. When you combine the two with a sedentary job – he’s a structural engineer - being overweight is a natural progression.

The scale only confirmed the prognosis everyone made; when he hit 110 kilos last year, he decided to do something about it. He controlled his portion sizes and tried to diet.

And a few weeks later, the six-foot gent had lost 2 kilos. And his motivation.

He recalls reading Gulf News’ series on weight-loss journeys and coming across the Keto diet – which cuts carbs and focuses on the consumption of good fats and proteins to force the body into using the fat as an energy source. He decided to do some research. After much reading and weighing the pros and cons, Ateequllah thought in October 2019 that this was his way forward. “Initially for 1 to 2 week it was really tough; to suddenly stop eating carbs specially rice, rotis (flatbread), etc., which I have been eating all my life and couldn’t imagine a meal without it. But losing around 2kg in first 12 days [motivated] me to continue,” he says.

He also began to walk – on average about a kilometer in the morning and another, similar distance, in the evening. He repeats, “I am lazy.”

Soon, his blood pressure pills became redundant. His cholesterol levels settled down. His energy levels, like his confidence levels, rose.

Then, says Ateequllah, he took a break from Keto for a couple of months before getting back to it. Now, 11 months since his initial start, Ateequllah is a happy man. He’s down to 84kg.

He’s not done yet. And now he’s got his wife involved. “But she’s doing dirty keto,” he says. Dirty keto involves eating fats and protein and cutting down carbs but without taking into account the most nutritious option. So one could eat burger patties minus a bun instead of a grilled piece of chicken – it still works, just isn’t as healthy.

As for his own cheat meals – Ateequllah found Keto versions for favourite food – Shrataki noodles, for instance, and cauliflower biryani.

“I still need to lose 4kg more to take me to normal weight as per BMI index which I will try to achieve soon,” says a confident Ateequllah.

His advice to anyone following in his footsteps is: be patient. “If you eat healthy food you feel like you are making yourself stronger and healthier…even if it takes time, the results will show.”

For him they are. He’s no longer afraid to meet friends or speak to family members over Zoom. Talk of weight is no longer a rip into his self-belief; it is an assurance. Life is good.

5 reasons to visit Dubai's Love Lake over the weekend

Meditate with Urmila: Practicing detachment has its benefits

Self-care Sunday: 4 relaxing massage deals to try in the UAE

My Home Kitchen: A passion that fueled a culinary journey

4 relaxing massage deals to try in the UAE

World Mental Health Day: How to go from surviving to thriving

World Art Dubai: The city is a cultural melting pot for international artists

20 popular emojis and what they really mean

IPL 2020 in UAE: Delhi Capitals vs Mumbai Indians – follow all the action live

Do what makes you happy, says Amitabh Bachchan