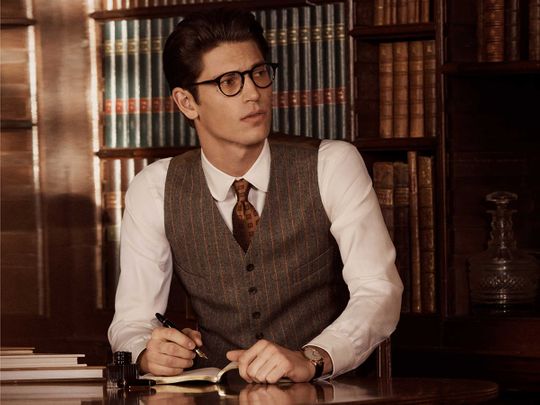 With an ensemble cast that dresses like they jumped out of the fashion spread of a men’s magazine, it’s no wonder that The Kingsman series is a fertile platform for brand collaborations. The sartorial partnerships this far have included menswear classics like shirts from Turnbull & Asser, shoes from George Cleverley, and accessories from Drake’s, eyewear brand Cutler and Gross, amongst others.

While the Taron Egerton’s character Eggsy wore a Bremont worldtimer chronograph edition watch in the first movie, he was seen moving with the times in the sequel with a TAG Heuer smartwatch. This year will see the release of the third film of the series, The King’s Man is a prequel that explores the origins of the spy agency. This year Jaeger-LeCoultre will produce a limited edition Master Ultra Thin Kingsman Knife watch to tie in the launch of the latest film.

The watch takes its inspiration from a ‘couteau’ pocket watch Jaeger-LeCoultre made in 1907. In case you are still wondering, couteau is the French word for knife. The period-correct inspiration seems apt considering the film’s setting, Jaeger-LeCoultre has reinterpreted the ‘Couteau’ as a refined ultra-thin dress watch.

The watch has a pink gold 40-mm-wide case that’s just 4.25 mm thick. The broad bezel that frames the dial slopes gently towards the edge of the case, creating a profile reminiscent of a knife blade. The winding crown, is protected by its triangular bow and is placed at 12 o’clock. As a hat tip to its association with the film, the caseback has been engraved with the Kingsman logo, as well as the legend “One of 100”. The watch is also presented in a specially-designed Kingsman sleevebox.

The watch is powered by the hand-wound Caliber 849. At just 1.85 mm thick, this is an incredibly thin movement that the watchmaker first introduced in 1994. The watch will be offered on online retailer Mr Porter’s website as a key part of The Kings’s Man ‘costume to collection’ from July 20 to September 6, after which the watch will also be available directly from Jaeger-LeCoultre online and in selected boutiques.

Guide to Argentinian cabrito or roasted goat with chimichurri

Stepping up to make a difference

Meditate with Urmila: Nature; the free teacher and healer

Upma or roasted semolina with vegetables and herbs: A complete breakfast

Recipe for Seafood and meat Paella

Watch how to make Daikon Roll

The popularity of Filipino cuisine

Qatar to require fans at 2022 World Cup to be vaccinated