Recipe: Bake yourself a savoury pie 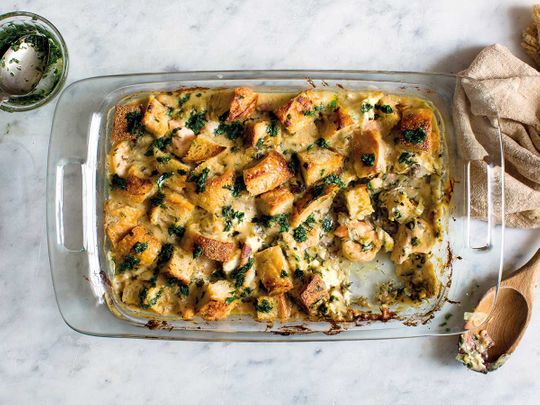 In Britain, the word “pie” has multiple meanings, some old, some new, some sweet, some savoury, some with a pastry crust, others without.

To an outsider, this is all very confusing. I can remember walking into a butcher shop in Edinburgh, more than 20 years ago, to buy an attractive-looking pork pie, wonderfully sculpted with a thick hot-water-crust pastry, only to learn, to my horror, that it needed to be eaten stone cold, so the jelly holding together the meat pieces remained properly set. I have since gotten used to such peculiarities, and have even learnt to like them, but I still find British pie culture perplexing.

Originally, a pie could mean anything wrapped in pastry. Before the age of Pyrex and Tupperware, a pastry crust was a convenient vessel for cooking a delicious filling and carrying it around, before ultimately eating from it. The Egyptians, Greeks and Romans all had their own versions. The Brits followed suit but, over the years, improved the quality of their baking dishes, which reduced their reliance on the crust. Today, a pie can have a full crust, a crust on the bottom or a crust only on top.

I love all pies equally; I find their inbuilt comfort totally seductive. At home, though, for ease and simplicity, the pies that appear most often are the ones covered with a creamy layer of mashed potato, which serves as the crust. My husband, Karl, makes a mean shepherd’s pie, which our two young sons devour happily and with admirable speed. Our freezer is always stocked with individually baked pies, ready for any hungry-child-shaped emergency.

One’s inner child makes it very difficult not to fall for traditional mash-crusted pies, but their appeal does rely on a certain baby-food-like quality. This by no means applies universally, but there is a tendency toward blandness and lack in the texture department, which you really want to avoid. The first and simplest rule to remember is one that people often hear but don’t necessarily follow: Let your pie sit for a good 15 to 20 minutes once it has come out of the oven. Being patient in the face of temptation pays off. The extra time allows the mashed potatoes to form a skin and the pie to set nicely so it doesn’t collapse into a puddle.

For extra flavour, meaty pies benefit from the addition of spices, herbs and acidity, and lots of garlic. For fish pies, smokiness is key. It helps balance the richness of the white sauce. If you can get hold of cold-smoked fish, grab it with two hands and add it to your pie, alongside other fish or seafood that isn’t smoked. In my fish pie, I use bacon, which does a similar job. Lots of aniseedy herbs, such as tarragon, dill and parsley, also help by adding freshness to the sauce.

Lastly, back to the crust. As much as I love mashed potato, with a bit of grated cheddar folded in, I’ve used bread here, both as a nod to the old pie crust and because the sourdough chunks, half soft from soaking up the delicious pie juices, half toasted and crisp from the oven’s heat, are the perfect pairing for a creamy celebration of seafood.

Fish Pie With a Sourdough Crust

2. In a large saute pan or skillet, heat two tablespoons butter over medium-high. Add the bacon and cook, stirring occasionally, until it starts to take on colour, about 5 minutes. Add the leeks and cook, stirring occasionally, until beginning to soften, about 4 minutes. Add the garlic and cook, stirring frequently, until fragrant, about 30 seconds. Stir in the flour and mustard powder, then add the milk, stock, 3/4 teaspoon salt and a good grind of pepper, stirring to get rid of any lumps. Bring to a simmer, then lower the heat to medium and cook until thickened, about 5 minutes. Remove from the heat, stir in the tarragon, parsley and dill, then set aside to cool slightly, about 15 minutes.

3. Add the salmon, halibut and shrimp to a 9-by-13-inch/23-by-33-centimeter baking dish. Sprinkle all over with 1/2 teaspoon salt and plenty of pepper, then top with the lemon zest and juice. Pour the sauce on top, stirring gently to combine.

4. In a large bowl, toss the bread with the remaining 3 tablespoons melted butter until well coated. Transfer to the baking dish, gently pressing to submerge the bread cubes halfway into the base. Bake until golden and bubbling, 25 to 28 minutes. Set aside to cool for about 15 minutes.

5. While the pie is in the oven, combine the reserved chopped herbs and oil in a small bowl. Drizzle this all over the pie right before serving.

Day 2: Hundreds of desert adventurers out in the UAE's Al Ain region as part of Gulf News Fun Drive

Cancel culture: Separating the artist from their work

Loneliness as dangerous as smoking or obesity: Study

Dubai's version of the Boxing Day sale: The 12-hour sale

Justin Bieber 'asked to leave' exclusive gym, because Taylor Swift had 'booked it'

How I got my job as...Aesthetic dentist at Apa Aesthetic clinic in Dubai