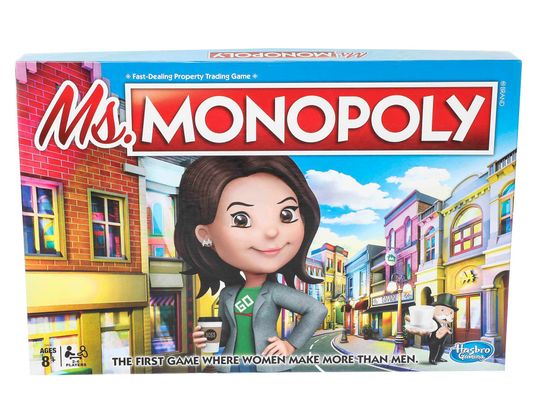 Move over, Mr Monopoly. There’s a new entrepreneur in town, and she’s taking over the boardroom, er, board game.

Toymaker Hasbro Inc on Tuesday announced the launch of Ms Monopoly, a modernised reboot of its iconic moneymaking board game meant to celebrate female trailblazers and create a world where women actually make more money than men. It also belatedly connects a little-known fact about Monopoly: A woman invented it more than a century ago.

There’s a new mascot on the game’s cover too, the brunette Ms Monopoly, who replaces the dapper, top-hat wearing Mr Monopoly, and she’s also a real-estate mogul. Alas, she does not sport a monocle, but she does wear some pretty mean M-shaped earrings.

“The Ms Monopoly game marks the first time in the franchise’s history where a new character will grace the cover — and while Mr Monopoly is a real-estate mogul, Ms Monopoly is an advocate whose mission is to invest in female entrepreneurs,” according to a statement from Hasbro.

The capitalism game now features a whole new look but similar classic gameplay. The coveted Park Place, railroads and their ilk are replaced by WiFi, ride-sharing tiles and groundbreaking inventions and innovations made possible by women throughout history, including chocolate chip cookies, solar heating and, yes, even modern shapewear.

Instead of building houses and hotels, players build business headquarters. The game pieces include a hard hat, wristwatch, book, jet, goblet and freeweight.

“Ms Monopoly celebrates everything from scientific advancements to everyday accessories — all created by women,” Hasbro said.

Incidentally, the Monopoly game was originally the brainchild of a woman named Lizzie Magie at the turn of the 20th century.

According to the 2015 book “The Monopolists,” which chronicled the storied history of the iconic American game, Magie was an ardent feminist stuck in a low-wage stenography job. She created what she called the Landlord’s Game to propagate the ideas of Henry George, a 19th-century proponent of “single tax theory,” who believed that land ownership was the only thing that should be taxed, according to The Times’ review of the book.

Her game shared many features with Monopoly as we know it, including play money, properties that could be bought and sold and a “Go to Jail” directive (that still exist in Ms. Monopoly, by the way). When Magie received a patent for her Landlord’s Game in 1904, “less than one% of all patents issued in the United States went to women,” according to “The Monopolists.”

Decades later, unemployed salesman Charles Darrow repackaged the game that he’d been taught by friends and sold it as his own creation in 1935.

Curiously, Hasbro made no mention of Magie in its Tuesday press release and did little to explain her omission when pressed by The Times.

“The Monopoly game as we know it was invented by Charles Darrow, who sold his idea to Parker Brothers in 1935,” a spokeswoman for Hasbro told The Times Tuesday. “However, there have been a number of popular property trading games throughout history. Elizabeth Magie — a writer, inventor, and feminist — was one of the pioneers of land-grabbing games. In 1904, she received a patent for the Landlord’s Game, which was meant to educate people about the dangers of wealth concentration.”

Meanwhile, to celebrate next month’s launch of Ms. Monopoly and spotlight other women who have challenged the status quo, Hasbro surprised several young female inventors and entrepreneurs with the game and approximately $20,580 in real money “to fuel their inventive spirit and further their projects.”

A trio of teenage girls was featured in a video vignette announcing Ms Monopoly’s launch.

Ms. Monopoly is the latest revamp of the treasured board game, which has seen thousands of spin-offs and themed reboots since its official debut in the Depression era. (The game even did away with the scorned thimble piece back in 2017.)

The new game is available for pre-order now at Walmart and will be available at most major retailers nationwide and in select countries globally starting later this month for a suggested retail price of $19.99.

Connecting UAE farms to homes: This app lets you trace where your food is coming from

At home: You can order a fancy dinner to your doorstep in Dubai

100 Café: First look at a new health cafe in Dubai

Yakult: Why you should include a probiotic drink in your diet this Ramadan

Lana Del Rey defends herself yet again in Instagram rant

Coronavirus: Sharjah family runs out of money as breadwinner is stranded overseas