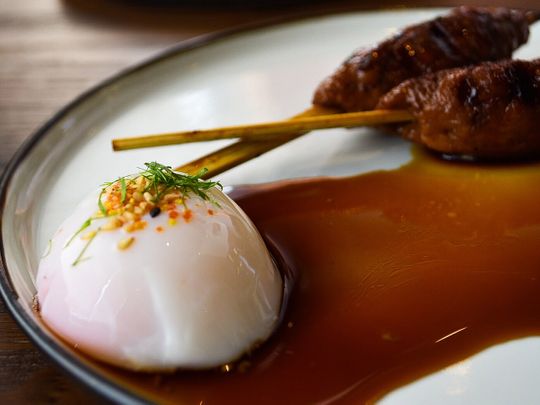 Japanese cuisine dates back thousands of years, so it stands to reason there’s more to the kitchen than just sushi and sashimi. Although rice and fish form the basis of many meals in Japan, there are dozens of other food categories cooked and served across the archipelago each day. Here are five different categories to try — and the UAE restaurants that serve them.

This is Japan’s answer to grilled and skewered meat and is served on its streets, as pub grub in izakayas, or at speciality restaurants. Little wonder, then, that homegrown celebrity chef Reif Othman picked them as the basis of his menu at Reif Japanese Kushiyaki, his new Al Wasl Road eatery. “It’s not an unusual dish in Japan, but it is for Dubai, which is why I wanted to create a restaurant concept around it,” he says. “It’s a quick and mess-free dish. And as you can make it with a variety of ingredients, there’s something for every dietary requirement.” He draws a distinction between kushiyaki — the term for any bamboo-skewered, grilled meats and vegetables — and yakitori, which refer solely to chicken skewers in teriyaki sauce.

How it’s served: Reif Japanese Kushiyaki offers 13 types of kushiyaki, but the most unusual one is the chicken meatball and onsen egg kushiyaki skewer. “In line with my goal to minimise food wastage, I use all parts of the chicken for the meatball. I serve it with a slow-cooked runny egg in a teriyaki sauce and you mix it all together for an umami-laden flavour.”

Several Eastern cultures are familiar with the concept of congee, a type of rice porridge or gruel. The Japanese version of this recipe, chagayu or ochazuke, dates to the Heian era, or about 750AD, and served topped with everything from tsukemono pickles to fish roe, salted salmon, wasabi and nori. In its earliest iteration, called yuzuke, hot water was poured over cooked rice, but by the 17th-century Edo period, it became fashionable to use hot green tea instead. “In those days rice was only cooked in the morning or noon and would be cold by dinner time,” says Toshio Date, Head Chef at Kiku, Le Méridien Dubai. “So people would use hot tea to warm up the rice.”

How it’s served: The restaurant uses Genmaicha, a green tea mixed through with popped brown rice, and serves it with a range of toppings, including arare crackers.

Japan’s cold winters offer plenty of reason for warming comfort food, and sukiyaki ticks all the boxes. This traditional nabemono, or hot pot, features sliced meat, tofu, vegetables and noodles all simmered together in a savoury broth. “Sukiyaki is a special-occasion dish that usually marks a celebration. It’s eaten in communal style, with everyone around the table,” says Leiko H., Founding Member of KOBEYa, a new Japanese and Far-Eastern gluten-free café and retail store at Dubai’s Wasl Vita Mall. It’s often combined with a bowl of rice — a donburi, or don for short — in which case it’s referred to as a sukiyaki donburi, and fits right into the trend for bowl foods.

How it’s served: KOBEYa serves it with Kobe beef, a breed of Wagyu from the Tajima strain of Japanese black cattle that is typically prized for its tenderness, flavour and marbled texture. “Our sukiyaki don is full of rich umami flavours with Kobe, tofu, Japanese leek, carrot and shirataki noodles. A poached egg adds extra richness.”

From ice kacang in the Philippines to raspado in Mexico, shaved ice is used in some of the coolest categories of dessert around the world. In Japan, this frosty favourite is called kakigori and has been served to overheated aristocrats since the 11th century, when blocks of ice would be shaved and doused in syrup. As ice became widely available following the industrial revolution, kakigori spread to the streets, where it’s still often made using a hand-cranked shaving machine and then liberally drenched with condensed milk, sweet bean paste and fruit. Kakigori is now on several restaurant menus in the UAE.

How it’s served: As part of Chef Ross Shonhan’s Weekend Lunch at the Mandarin Oriental’s Netsu, it comes topped with tiramisu, crème brûlée, chocolate banoffee or Ichigo strawberry. Or you could head over to newbie Kobeya, which serves it Arabian-style, with date syrup, saffron, almond flakes and pistachios.

Raw fish being a Japanese culinary mainstay, it’s no surprise that it has embraced carpaccio, which is made using both beef and fish. It’s not the same as tataki, though, says Jaime Castaneda, general manager at 99 Sushi Bar & Restaurant. Carpaccio is a cut of thin layers of raw meat of fish, whereas in the tataki method of preparation, the meat is briefly seared on a pan or over a hot flame. They serve a range of carpaccio, made from Wagyu, prawns, scallops, yellowtail, mullets and otoro, the sweet, buttery belly of the tuna, which are dressed with confit orange peel, coriander oil and ponzu sauce.

How it’s served: 99 Sushi’s most popular dish is Obsiblue carpaccio, made with the delicate prawns now widely used in Michelin restaurants. “Our Obsiblue Carpaccio has all the elements of a Japanese dish. It is made of a slightly thinner cut than the sashimi, uses kizami wasabi as the protagonist of the dressing, and shichimi togarashi [a Japanese spice blend] adds the final touch to the dish,” Castaneda says.

Why design's regional brands are bang for the buck

Quarantined doctors turn to video chats so they can see patients

Design Diary: Life in the time of Covid-19

Smokers likely to be more at risk from coronavirus: EU agency

Austin Centre for Rehabilitation: Helping children to develop to their full potential

Call of a distant shore