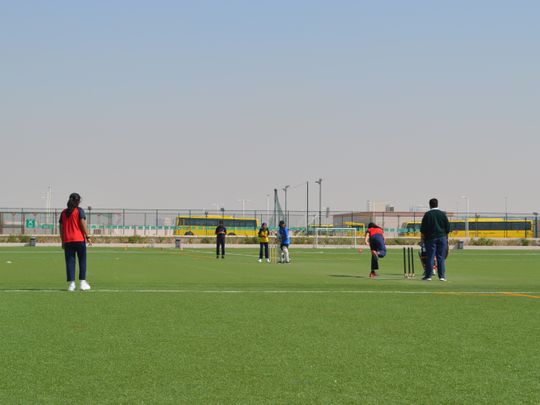 As a girl who loves everything cricket, I was tired of having passion for the sport but noticing that the emphasis was always on the boys’ team. And I found out that I wasn’t alone. The encouragement and facilities were not enough for the number of girls ready to participate. This gave me the idea to start ‘Strike Like A Girl’.

Disparity between boys and girls

‘Strike Like A Girl’, is an inter-school initiative aimed at raising awareness about women in cricket, a cause very close to my heart as well as raising money for charity. Being an avid lover of cricket since a young age, I had always found the contrasting levels of support between the men’s and women’s game rather surprising, seeing as there are a lot of girls playing the sport, and lack of participation was not an issue.

My motive is to showcase the incredible talent that we have, here in the UAE, where girls are excelling in the sport.

Cricket was a big part of my life growing up in a Pakistani household, and I grew up playing both in Pakistan and in the UAE. Being a part of the ICC Academy, the disparity between facilities and participation of the girls and boys training pushed me to pursue this project, as I believed girls deserved to play and have their talent showcased on a larger scale.

So what exactly happens in this tournament?

‘Strike Like a Girl’ is a cricket tournament for girls teams across the UAE that was hosted at GEMS Heritage School Dubai on February 7 and 8.

Six teams played each other in a group format, with the top two teams in each group going through to the semifinals, and eventually finals. The matches had eight players on the field at a time and it was a ten-over format. Each of the ten overs had six bowls.

Having secured sponsorships from leading brands and the event was endorsed and sponsored formally by Emirates Cricket Board. A number of leading UAE schools including Delhi Private School, Winchester, Cambridge International School and Heritage Indian School participated.

Through crowdfunding and sponsorships we have raised over Dh15,000 to donate to Dubai Cares and the Al Jalila Foundation. The tournament is the first ever girls cricket tournament on such a scale in the UAE, and will, I hope, pave the way for more new and exciting opportunities for girls to excel in the sport.

With this year’s inaugural tournament, I plan on continuing the tournament as an annual event, and expanding it to more schools, across more Emirates, with a larger number of matches to be played. Cricket is such a huge sport in the UAE, with the men’s national and under nineteen teams doing exceedingly well in the recent past. Women’s cricket should be given as much importance as the men’s game, and the talent and raw skill off the cricketers in this country should be embraced rather than ignored. I hope that in the future, ‘Strike Like a Girl’ can be a catalyst for change in bringing the plight of girls cricket to light, and allowing people to recognise the beauty of the sport, for both girls and boys.

I encourage UAE residents to promote women’s sports as a whole, even aside from cricket, as if we ignore the potential of these talented girls, we will be missing out on a huge opportunity. Sports has the ability to transform lives, and influence mindsets, and I hope to expand this tournament outside the UAE in the coming years, to places such as India and Pakistan, were women’s lives can be changed for the better.

For me personally, the person that really pushed me to pursue this event was my mother, Faiza Saadaat. When embarking on this journey, the doubts and challenges off such an initiative flooded my mind, but she always reminded me why I am doing this, and who I am representing.

Without her advice, motivation and belief in me, this event would not have been possible. My coach at the ICC Academy, Suraj Karavadra, supported me throughout the early stages of the tournament, as he too believed in the importance of women’s cricket being promoted in the UAE

— The reader is a student based in Dubai.

Be a community reporter. Send us your videos and pictures at [email protected]

Coffee helps in the the fight against colorectal cancer

What differentiates the Dishdasha from the Kandora?

NYFW Notes: Athleisure is getting dressed up

Friday Masterclass: Free lessons to design your home like a pro

5 of the best places for afternoon tea in the UAE

Panic! at the Disco's flourishes weren't just dramatic. They were theatre

Dubai Airports achieves many firsts as it turns 60

Weekend watchlist: 10 TV shows and movies to check out