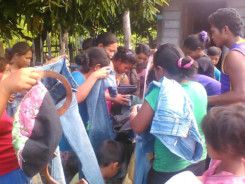 What you need to know:

I got extremely inspired to carry on my efforts when I read a reader’s report in Gulf News last week, (“School ends but used books, uniforms find new owners at this school, Gulf News, July 15). Kudos to all students who make the Initiative work.

Let’s all give a smile to the less fortunate by giving our unwanted things that is useful to them. Reading the report gave me the push to share my latest initiative with Gulf News readers: “Your Waste Is My Gold” - collecting old shoes and clothes for the Mangyan people of island of Mindoro, the Philippines.

When I first arrived in Dubai, in 2006 on a visit visa, I slowly began my efforts. A garbage bin with some old computer parts thrown at the side caught my attention. I am from the Philippines and growing up I did not have the privilege of using computers. Memories of using cardboard shapes and drawings to familiarize ourselves with computer parts flashed in my mind. So I decided to collect those parts and kept them.

In 2009, I appealed to the public in a report by Gulf News, asking for them to donate an old PC to send back home to my own children. The response was great. I received a lot of calls of people wanting to donate their old big bulky computers with monitors. Sad to say that I could not accept all of them because of the shipment costs.

However, I did not let that stop me.

The idea of helping others got even more intense in my heart after I read a lot of good deeds people are doing in Dubai through Gulf News. I started to buy old clothes at a cheap price at St Mary’s Church every market day, wash it and iron it, and keep it in a box. I wanted to give it to the Mangyan people of island of Mindoro, the Philippines.

My plan is to continue my initiative and giving. I hope to continue buying old clothes, sometimes at a price of Dh1, from the flea market whenever I have an excess amount of money, usually I can spare Dh15. I then try to ship these clothing items back to the Philippines where they are much appreciated.

Discarded items can mean a lot to some

People are just throwing their old valuable things like old shoes, kitchen utensils, clothes and bags etc. They do not understand how some people in some parts of the world would appreciate these. I always try to prepare packages and collect as much as I can before Christmas time.

Donations to be sent at the right time

Sometimes, I have noticed that in the UAE, some items that are put into donation boxes that are provided on the streets and other public places, remain lying there until they are worn out or damaged from the high heat. I would appeal to different organisations and authorities of behind those initiatives to implement ways to make them effective. If people are donating, it’s our job to make sure the donations are taken care of and extended to those in need on time.

Newspapers are one of the biggest means of spreading awareness about my initiative. Readers have always responded positively when my initiatives have been highlighted in Gulf News. Once again, I would like to showcase what I do and hope to inspire others. The power of words is mighty.

Gulf News Fun Drive: Watch the splendor of the desert

Is your lifestyle affecting your bone health?

Dubai's version of the Boxing Day sale: The 12-hour sale