Battle of the brunches 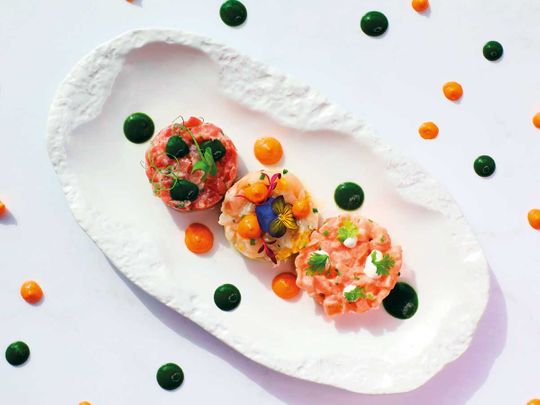 We’re midway through our chilaquiles — think nachos but with white cheese instead of melted Cheddar, pulled beef for mince and a fried egg on top — when a man walks on stage blowing into what looks like a shisha pipe hooked up to a mini piano keyboard. He’s playing Despacito. Around the time Luis Fonsi and Daddy Yankee were putting the finishing touches on the Spanish international megahit, Elena Duggan, winner of MasterChef Australia’s eighth season, wowed judges with her take on the Latin American dish. These chilaquiles are her recipe.

The chilaquiles are the last of five starters served at MasterChef the TV Experience’s Showtime! brunch. With a few notable exceptions, brunches in Dubai are increasingly turning to this model — you get a portion of each starter and are free to reorder them to your heart’s content, with one main to pick.

For Colin Clague, Executive Chef at Turkish eatery Ruya Dubai, the shared plate brunch serves two purposes: cutting down food wastage and reducing costs for the restaurant. “You sit down, still having as much as you want, as much as you can, but the quality is much better. You don’t have to get up, come and help yourself, and if nobody eats it or it’s sitting there too long, it gets thrown away.

“If somebody wants an extra three pieces of cig kofte [beef tartare with bulgur wheat, baby gem and caviar], no problem. Whatever you want, you can have but I don’t waste anything. So it benefits the world but it also benefits my food costs.”

It’s often said that millennials won’t be able to buy homes because they’re too focused on living in the here and now and prefer to spend their money on experiences over long-term investments. Well, the JW Marriott Marquis’ Wanderlust brunch has the potential to deliver memories in spades, with a lavish, expansive spread featuring food across a number of themed zones. There are ten live food stations, a DJ and saxophonist tag team, someone dressed as Barney wandering around offering revellers beverages in 30ml measures, dancers in latex catsuits and a dizzying variety of food and drink stations set up over the entire floor of the world’s tallest hotel.

If you’ve got children, there’re a number of options out there for you, too. The newest kid on the family brunch block is FamilyFest at Caesars Bluewaters Dubai. While beverage stations are available for the adults, their kids can enjoy a station of their own — for slime. There’s also face painting, balloon art, cooking lessons, a magician called Magic Phil, superhero and princess cosplayers, and an animal petting zoo.

So there’s truly something for everyone. To paraphrase a translated line in Despacito, Dubai’s brunches are the magnet and we’re the metal.

Revealed: UAE is world's most searched destination for 2021

5 great Fish and Chips places to try in Dubai

In pictures: 12 exciting things to do in Dubai this week

How tracking your activity helps reduce your stress

Optimise your immunity as you return to work

Laventure Transatlantique GMT is a nod to a bygone era

Southampton Test: 'What a Test match to herald the return of cricket'