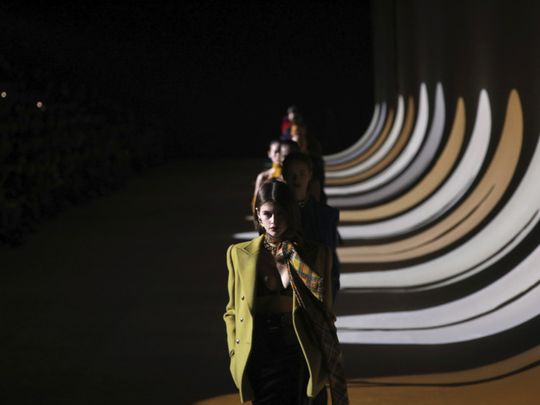 After first cancelling the July shows for menswear and Haute Couture, the French fashion federation has now organised an unprecedented schedule of digital-only events instead.

Top houses such as Chanel, Dior and Hermes are set to show their new Fall-Winter 2020/2021 couture collections or their Spring-Summer 2021 menswear collections online this week — but with no celebrity guests, no Vogue Editor-in-Chief Anna Wintour and none of the usual frenzied media circus.

No one from the public will be allowed to see the clothes in person at all, in fact, during this on-screen-only version of fashion week have alread started. Some shows will be live-streamed, and others may be pre-recorded.

The federation decided this spring that because of social distancing guidelines, Paris Fashion Week — famed for its 25-centimeter (9-inches)-a-bottom seating allowances — would skip in-person shows for a season, and return to normal, or, at least a new normal, in September, barring a second wave.

Chanel is live-streaming its couture show Tuesday after piloting such an approach in its Cruise collection in June. Hermes is presenting its show as a digital “experience” on two separate days, one streamed live and the second time as a video replay.

Dior Men’s is putting on a digital show, while Dior Couture is revealing a “surprise” to editors, who will admire and review glimmering silk chiffons and diaphanous taffetas from the comfort of their couches.

Valentino, meanwhile, is going “rogue” this season by unveiling an online sneak-preview during its allotted couture slot Wednesday of what it promises to be a live performance in Rome for later in the month. It says that the later event will “bring together the human and the digital touch, creating a dialogue where neither of them will take the lead.” It hasn’t said whether that means actual members of the public will be allowed to attend, or given details.

The new digital Paris Fashion Week calendar isn’t bad for everyone. Normally, there is one official show per hour, allowing gas-guzzling cars to crisscross Paris transporting editors to and from venues. But because there’s no need for travel this season — apart from to the kitchen to the living room and back to top up on mineral water and coffee — shows have been spaced out by only 30 minutes, effectively doubling the amount of on-calendar shows. The new gaps have been populated by smaller houses that wouldn’t normally get a look-in, and menswear newbies such as Ernest W Baker, Alled-Martinez, Cool TM and Egonlab.

“This season will definitely have changed the fashion industry moving forward, especially for smaller brands, as the digital avenue can get them bigger visibility, by being on-calendar,” Michault said. This season the calendar boasts a record 68 men’s shows over five days.

It’s too early to tell whether this will sound the death knell for the traditional fashion show, but for Haute Couture, many fashion critics warn that this approach cannot do justice to the art of high luxury fashion and it just won’t catch on.

"Paris is where designers show ideas, and ideas can’t come through unless the shows are presented to breathing witnesses, who can testify with emotion to live clothes and staging,’’ said Long Nguyen, a freelance critic who has spent decades observing fashion from the front rows.

“It’s like physically going to Tibet or viewing it online — it’s not the same experience. For commercial clothes digital streaming is fine, but couture and high fashion is different,” he added.

Paris Fashion Week has said that next season, in September’s women’s ready-to-wear, there will be a return to the “normal” style of physical shows, but given the persistent threat of the resurgence of the virus, houses will likely have to change the way they showcase their clothes. Paris houses may have to rent out bigger spaces to adhere to social distancing rules, or reduce audience sizes.

“Either brands will go large at giant venues like Louis Vuitton or go small and cull the guest list with fewer guests. Or go digital. Nothing beats being at a fashion show, sitting on the front row and seeing the clothes up close, but something’s going to have to give,” Michault said.

The coronavirus epidemic was confirmed in Italy during Milan’s February shows, prompting Giorgio Armani to hold his show on February 23 behind closed doors, while the fashion world watched live over streaming. Many complained at the time that the online format simply did not work as a platform to view and appreciate designs.

Nevertheless, the virus looks like it may be the catalyst for change in the whole high-fashion sector.

Saint Laurent and Gucci have used the coronavirus scare to rethink the pace of the fashion industry, announcing they will leave the four-times-a-year rhythm of the fashion calendar behind, with its shuttling of fashionistas between global capitals where they squeeze shoulder-to-shoulder around runways for 15 breathless minutes.

Last week, storied Parisian house Mugler also said it would consolidate all its annual output into two shows from four “to respect a steady growth plan and the creative pace of the Paris atelier.”

Guide to Argentinian cabrito or roasted goat with chimichurri

Stepping up to make a difference

Meditate with Urmila: Nature; the free teacher and healer

Upma or roasted semolina with vegetables and herbs: A complete breakfast

Recipe for Seafood and meat Paella

Watch how to make Daikon Roll

The popularity of Filipino cuisine

Golf, US Open 2021: Following Rafa Cabrera Bello at Torrey Pines: A move in the wrong direction for Rafa