Virus, hurricanes and Beirut blast force Swiss Re to add another $500m in reserves 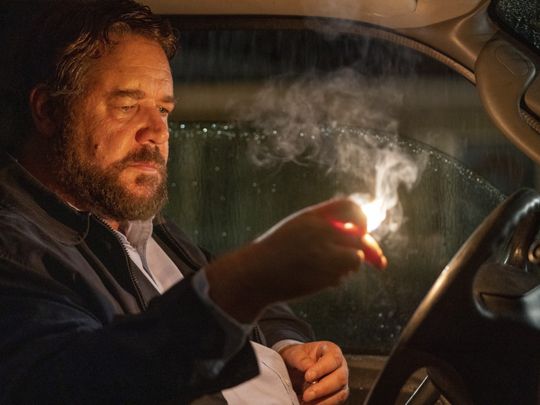 Oscar-winning actor Russell Crowe zooms back onto the big screen with the full throttle psychological thriller ‘Unhinged’. He’s fuelled by an emotion we’re all familiar with — road rage — but dials it up to a deadly new level. Here’s everything to know about the film.

‘Unhinged’ is the first film to receive a wide release in American theatres after the Covid-19 pandemic hit and forced a five-month shutdown. The high-octane psychological thriller showed on nearly 2,000 screens across the nation in August, raking in more than $4 million (Dh14.7 million) on opening weekend alone.

Russell Crowe’s character is credited as ‘The Man’

Out in UAE cinemas this weekend, ‘Unhinged’ follows Crowe’s deranged character, who’s known only as ‘The Man’. His lack of name adds to the fact this character feels invisible and takes out his rage on an unsuspecting stranger.

Rachel (Caren Pistorius) is stopped at a traffic light and running late to work when The Man sets his eyes on her, making her realise that her life — and the lives of everyone she loves — are at risk.

Crowe’s theory is that his character, who is not named, is more like a hostile creature than he is like a human — and that means he has a killer instinct.

“People ask me about how we based the character, and the director [Derrick Borte] and I talked about him in terms of the shark from ‘Jaws’,” Crowe, 56, told ScreenRant. “The character’s already triggered before the movie starts, and he’s just gonna go about operating the way his instinct to catch his prey is making him operate. So, he’s not operating from a human perspective anymore. It’s that same thing that the shark does. The shark has its own reasons, and it’s just doing what it does naturally. And that’s what this guy is.”

The actor was afraid of how real the role could be. Thinking back to reading the script, he compared the protagonist’s unpredictable rampage to the shootings we often see on the news.

“What I was reading was not a device for a genre film, but a comment on the place we’re in where, in cycles of time that are getting closer and closer together, someone stands up and enacts this type of rage,” Crowe said, in an interview with the Sydney Morning Herald. “Whether they’re taking a firearm into a school or shooting in a Las Vegas nightclub, whatever it happens to be, we’re seeing this situation where a certain type of person is becoming bereft of humanity and empathy and taking this path.”

Asked in an interview with Entertainment Weekly what it took to get Crowe, the German-born director laughed and gave a surprising answer.

“Well, we made an offer to him, and he agreed to read the script, and once he read it he wanted to have a meeting with me,” recalled Borte. “We had what I thought was a productive, good first meeting. Then he said he wanted to watch my last film ... he watched the film that night, and then called back the next day and wanted to talk about that film because he really enjoyed it.” The pair talked more about ‘Unhinged’ and “next thing you know,” says Borte, Crowe was on-board.

The Man’s victim, Rachel, is played by a relative newcomer

South African-born New Zealand actress Caren Pistorius, 29, is best known for her 2015 role as Rose in ‘Slow West’, starring Michael Fassbender, which premiered at the Sundance Film Festival. She plays a single mother who’s carrying a lot on her shoulders, and when the incident on the road takes place, it heightens all her emotions.

“The Man represents the anger that we hold as a society,” said Pistorius. “And how, perhaps, that anger is not dealt with properly.” Pistorius added that it was “inspiring as an actor” and called herself “really lucky” to work across from Crowe: “[I tried] to absorb as much as possible.”

Crowe didn’t have to agonise over the back story for The Man, using his 50 years of acting experience (he began acting at six years old; he’s now 56) to inform his approach to the role.

“[The director and I] were very clear in our conversations, and of one of the things we agreed on is there’s no justification for this guy,” Crowe said to ScreenRant.

“He can’t, at some point in time, stop and have a woe-is-me soliloquy where he explains what’s been going on his life because his response is still disproportionate; his response is still unjustifiable. So, we’re on the set, we’ve got a low budget, we’ve got a limited amount of days — but we’re in New Orleans, shooting in the sunshine. We did have to stop for a hurricane or two to pass by, but that’s standard for that part of the world. But it really was just a bunch of professionals who’ve made a lot of films, looking at each individual situation that makes up the sum total of the movie, saying, ‘How can we shoot this physically to make it as extreme as possible?’”

But above all, the filmmakers want you to enjoy the ride

Director Borte says that first-and-foremost, the film is about having a good time.

“The film is, number one, entertainment,” he told EW. “It’s an edge-of-your-seat ride for ninety minutes. It just gets you to realise, wrong place, wrong time, honk your horn at the wrong person on the wrong day, and it can go horribly wrong. Beyond that, I would hope that film [is] fuel for conversations about where we are in the world today. Yet, as I said, the main takeaway here is, it’s a heck of a ride.”

The beauty treatment that delivers impressive results with minimal downtime

Art, food and waterslides: Fun things to do in UAE this weekend

SENSASIA is opening it's most luxurious spa in Dubai this month

This is the most searched for skincare ingredient of 2020

Designer interior collection that brings a cool factor to your home

US sets requirements for 'phased resumption' of cruises

Apple loses $450b in value on iPhone woes

IPL 2020 in UAE: Delhi Capitals vs Mumbai Indians – follow all the action live