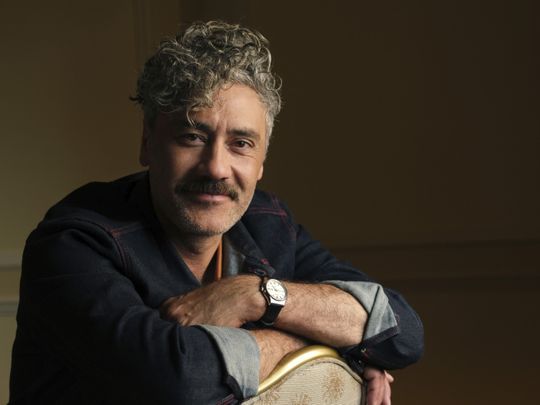 It’s just a few hours before ‘Jojo Rabbit’ will make its world premiere at the Toronto International Film Festival, and writer-director Taika Waititi is still figuring out how to talk about it.

“I’m still learning, really, how to describe it,” Waititi says.

It’s no easy task. But, then again, it was even harder when Waititi was pitching ‘Jojo Rabbit’ to film executives. “You don’t walk into a studio and say: ‘Nazi comedy!’” he says.

‘Jojo Rabbit’ is as singular as its director, the New Zealand filmmaker of absurdist comedies (‘What We Do in the Shadows’, ‘The Hunt for the Wilderpeople’) who’s coming off helming the 2017 Marvel smash ‘Thor: Ragnarok’.

It’s a coming-of-age story about a 10-year-old boy named Jojo (Roman Griffin Davis) who lives with his mum (Scarlett Johansson) and has an imaginary friend he talks to for company and guidance.

Oh, and also ‘Jojo Rabbit’ is set in Nazi Germany and that imaginary friend is Adolf Hitler.

But that summary doesn’t really do the job either. Hitler, as played with bug-eyed flair by Waititi, is really the young, uncertain boy’s confused, half-formed idea of Hitler, the man he’s been indoctrinated to idolise.

The movie starts off a madcap comedy and gradually morphs into something sweetly sentimental, as Jojo begins questioning what he’s been told about Jews after discovering one (Thomasin McKenzie) living in his attic.

‘Jojo Rabbit’ is about growing up in a world where the received wisdom is ridiculous.

“It’s vital that we keep retelling these stories and doing them in inventive and interesting ways,” said Waititi, alluding to more straightforwardly serious films about WWII Germany. “If that involves adding humour and absurdity, then so be it. It’s still communicating the same ideas.”

Whether Waititi managed to pull it off was of considerable debate once his film did hit audiences Sunday night in Toronto. ‘Jojo Rabbit’ was hailed as a masterpiece, Waititi’s eccentric opus and a worthy heir to Charlie Chaplin’s ‘The Dictator’ by some, while others deemed it a badly misjudged misfire that awkwardly melds humour with atrocity no better than Roberto Benigni’s schmaltzy ‘Life Is Beautiful’ did two decades before it.

Entertainment Weekly called it “an audacious piece of Third Reich whimsy that almost definitely shouldn’t work as well as it does.” Variety called it “‘Life Is Beautiful’ made with attitude.’”

‘Jojo Rabbit’, which Fox Searchlight will release Oct. 18, had come into Toronto one of the festival’s biggest question marks. It might leave that way, too.

Last month, Variety reported that some Disney executives were concerned about ‘Jojo Rabbit’ being too edgy for the company, which earlier this year took control of Fox Searchlight as part of its larger acquisition of 20th Century Fox. One executive reportedly worried that the film would “alienate Disney fans.”

But Waititi said he doesn’t believe that report. He has his own history with Disney. Waititi’s ‘Thor’ movie was a Disney release and made $848 million (Dh3.11 billion) worldwide. He’s set to direct its 2021 sequel.

“About a month before that article, Iger and Horn had seen the film and they have been very complimentary. They gushed over it,” said Waititi, referring to Disney chief executive Bob Iger and chief creative officer Alan Horn. “They’ve continued to send me supportive notes about the film.”

Waititi also challenged the idea that an independent film like “Jojo Rabbit” could ever be worthy of such consternation.

“It’s like saying, ‘Watch out for that ‘Life Is Beautiful’ movie. It’s going to bring down the corporation,’” said Waititi. “I don’t think you have to worry about this movie because once you see it, it speaks for itself. It’s uplifting and it’s a very positive message.”

Regardless, ‘Jojo Rabbit’ makes for one of the more audacious gambits by a filmmaker coming off a box office success, with industry capital to burn. Waititi, who’s Jewish and Maori, from the Te Whanau-a-Apanui tribe, originally wrote the film years ago (before his previous three features) after his mother’s description of a novel (Christine Leunens’ ‘Caging Skies’) piqued his interest.

“Over a couple years I just slowly chipped away at the script. I was never really impatient to make it. I always knew that it was going to be a good film and a really important story, and that if I had to wait, that would be fine,” he says.

While Waititi was on post-production on ‘Thor’, Searchlight approached him about making ‘Jojo Rabbit’. And partially because there were likely to be few takers for the role, they suggested Waititi play Hitler, too.

“They convinced me to play Adolf. That was never really my idea,” said Waititi. “Look at me. I’m Polynesian. I’m the least obvious choice. But maybe that’s why it’s a good choice.”

Coronavirus: Sharjah family runs out of money as breadwinner is stranded overseas