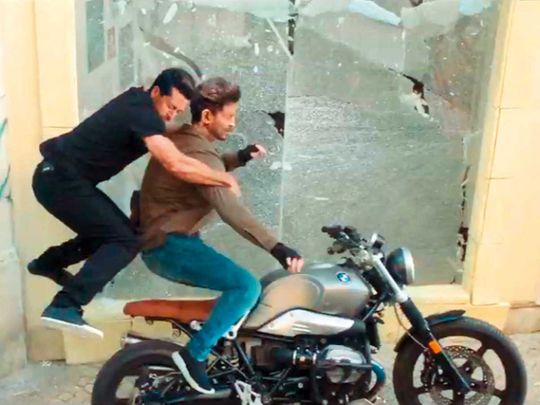 A day before Hrithik Roshan and Tiger Shroff’s action bonanza War was perched to release in the cinemas worldwide, its hunky lead stars implored their fans and critics not to reveal its story or blow the lid on spoilers.

Their fears were spectacularly unfounded. What story? What spoilers?

Even if this journalist truly wanted to give the proverbial farm away and tear this sinewy muscle-fuelled action caper apart, she would be clutching at straws. Unlike its beefed-up heroes, there’s no meat in here.

Two dishy dreamboats Kabir (Roshan) and Khalid (Shroff) play a pair of accomplished lethal Indian agents on a mission to obliterate a terrorist kingpin. Their convoluted assignment — involving guns, goons and gore — takes us across the globe in such rapid progression that your head will spin. Forget spoilers, jet lag anyone? In fact, Hollywood’s superspy James Bond might even hang his designer shoes in shame, after witnessing Khalid and Kabir’s (K & K) whirlwind secret operations that blow up in different exotic locations such as Portugal, Morrocco and Amalfi Coast in Italy.

War, directed by Siddarth Anand, is a spectacularly tedious exercise revolving around brawny agents who love the bloody sport of pummelling each other to the ground or indulging in one-upmanship. Don’t get us wrong here. The action sequences are swish and spectacular, but after a point it just looks like the boys are showing off.

If you have Hrithik Roshan’s character, Kabir, doing a slow-motion walk with thunderous music and fire explosions going off behind him, Khalid — his junior colleague — gets a mini explosion and a chance to show his skills on a souped up bike.

Out of the two men, it’s the relatively experienced Roshan who shines. He’s perfectly cast as an agent who goes rogue and jumps to the dark side. Shroff, who looks up to him, comes off as a rookie agent. When it comes to stye and swagger, it’s Roshan’s sanguine deadly looks that save the day. Their face-off lacks steam and their on-screen battles of outwitting each other feels tedious after a point.

Vaani Kapoor, who plays a painfully predictable role as Naina — a nubile acrobatic Indian dancer in Europe — has scant little to do and her chemistry with Kabir — a brooding Roshan — is nothing to write home about. Their star-crossed union leaves you unmoved, but her washboard abs are truly drool-worthy.

Credit is also due to Anand and team for coming up with ingenious ways of showcasing stunts in the harshest of terrains. The car chase sequences on snow-filled roads were a sight to behold, just like the bodacious lead players. At one point, Shroff also takes off his shirt before beating his opponent to a pulp. Why he did so is anybody’s guess, but it made the long drawn-out duel scene more bearable.

If perfectly-timed stunts and explosions of souped-up cars can appease your soul, then give War a shot. Otherwise, it’s merely a battle of the brawny boys with questionable brains. The real casualty? The viewers who feel the trauma of sitting through this crazy action misfire.

Bollywood to Hollywood: Meet the rich and powerful celebrity investors

Wishful thinking: 10 beautiful beaches you have to visit in your lifetime

Coronavirus: What's it like for an Abu Dhabi doctor who lives at a hotel away from his family as he treats COVID-19 patients?

Pocari Sweat virtual run to be held on July 3