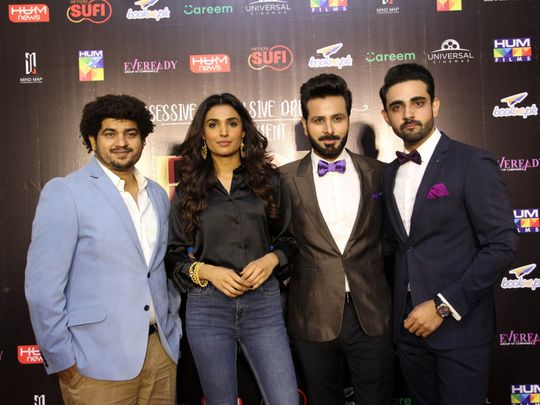 ‘Ready Steady No’, starring Amna Ilyas opposite debutant Faisal Saif, had a red-carpet premiere in Lahore last week. Interestingly, unlike the glittering event which saw an all-dressed-up lead cast as well as first-time screenwriter and director Hisham Bin Munawwar engage nervously with an audience comprising guests from the media industry, the film is a simple, unpretentious and modest affair.

It is made on a small budget and deals with everyday people caught in situations that are funny but also saying some important things about a typical Pakistani society.

For one thing, the film makes a satirical comment on the irrationality and hollowness of caste system in which the Jutts would not let their progeny marry outside of their family or tribe/caste — in this case, the Gujjars — and vice versa; no matter how perfect a match is, or the two people are madly in love with each other.

Here we have Razia (Ilyas) and Faisal (Saif’s screen name is the same) playing a lovelorn couple in an old neighbourhood of Lahore, who are forced to elope and get hitched because their elders are vilely against the marriage.

The movie also takes jibes at the corrupt institutions of judiciary and clergy, represented by a pot-bellied, dim-witted lawyer (Marhoom Ahmad Bilal) and the holier-than-thou “Maulana sahib” (Zain Afzal) respectively. It is clearly by design that the lawyer is named ‘Mazhar Fakhar’, to rhyme with a certain English-language slur, and the Maulana is shown to be excessively hung up on the ‘letter’ (as opposed to ‘spirit’) of the scriptures, which only wastes some precious time for the lead characters who are on the run and want to contract a civil marriage at the earliest.

Writer-director Munawwar takes the mickey out of the police department too. When Faisal’s domineering mother visits a local thana (police station), because she must nominate her husband in the FIR about their son’s disappearance, the inspector requests her to hum a song in order to kill time. The hilarious goings-on at the police station only reinforce the absurdity of it all.

Even the ‘Fourth Estate’ isn’t spared. An initiated audience will readily get the similarities between Numaya Khan — a hyper-aggressive TV show host who is seen ‘raiding’ a public park to catch any couples off guard and shame them live on camera — and the real-life TV anchor Maya Khan who led a similar pack of moral police inside the city gardens and parks a few years ago. That the entire episode got Maya brickbats from the civil society is not of concern to ‘Ready Steady No’ whose purpose is solely to expose different ills of the society — albeit in a comic vein.

The humour here is essentially situational and verbal — you just can’t miss the Lahori slangs! But the film also seems to borrow elements from theatre: consider the scene between the hotel’s shady receptionist and Faisal, which is burlesque-meets-slapstick in nature; or, the one where Razia is locked in her room by Muneer (Munir Khan), her cousin and suitor.

Throughout the narrative, the film keeps returning to slapstick, peaking in the climax which now involves two pairs of twins of Nargis Rasheed and Salman Shahid. At over 20 minutes, this part is one heavy dose of comedy of errors.

In the opening credits, there is a dedication to Shoaib Mansoor, celebrated director with whom Munawwar worked as a production assistant on ‘Bol’ (2011). But Munawwar’s true loves are admittedly Indian poet/lyricist and filmmaker Gulzar and maestro AR Rehman. No wonder they both get a sweet, lyrical mention in the soft and melodious track, ‘Dekho Dekho,’ written and composed by Munawwar who has also sung it with Rahma Ali.

What’s more, the picturisation of this song is reminiscent of Rani Mukherjee and Vivek Oberoi’s ‘Chupke Se Raat Ki Chaadar Talay,’ from the film Saathiya (2002), which had lyrics by Gulzar and music by Rehman. This might be a coincidence, though.

‘Ready Steady No’ was initially offered to Iman Ali, but Ilyas embraces Razia with such completeness that you cannot imagine anyone else in her place. Saif, on the other hand, will need to work hard on his expressions and dialogue delivery if he wishes to stay in the business.

The film’s cinematography is perhaps its only other weak point. The film opens smack on a medium-long shot of the lead pair, out somewhere. A drone shot or two here would have made for a more satisfying viewing, as the audience would get a sense of the place. However, the chase sequence in the narrow alleys of the old mohallah is well executed.

From Abu Dhabi to Hamburg, we pick the best winter destinations

Your fabulous guide to this weekend in Dubai: January 9-11

Trust us, this is a skincare revival your routine has been craving

Net-A-Porter addict? New CEO for the Middle East has some exciting plans

Out ultimate gift guide for the home – Emirates Woman