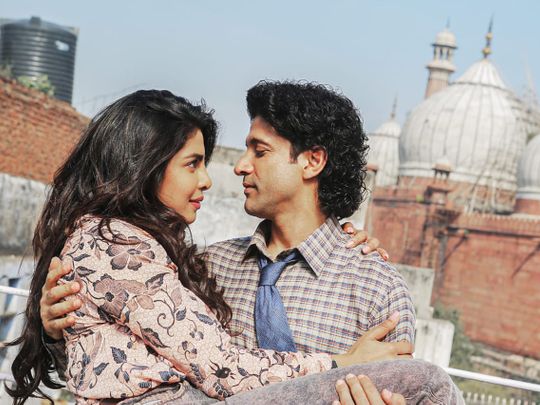 The trailer for Priyanka Chopra Jonas’ high-anticipated film, ‘The Sky is Pink’, which also marks her return to Hindi cinema, released on Tuesday ahead of its premiere at the Toronto International Film Festival.

Also starring Farhan Akhtar, Zaira Wasim and Rohit Saraf Suresh, the film is based on the biography ‘My Little Epiphanies’ by motivational speaker Aisha Chaudhary who died in 2015 at the age of 18 after being diagnosed with pulmonary fiobrasis.

Chopra Jonas, whose last Bollywood film was 2016’s ‘Jai Gangaajal’, is also the producer of the film, directed by Shonali Bose, best known for the acclaimed 2014 film ‘Margarita with a Straw’.

The trailer of ‘The Sky is Pink’ is narrated by Wasim’s character who tells her favourite love story, that of her parents played by Chopra Jonas and Akhtar.

She calls herself the villain of the story, as her parents are seen celebrating her birth and then struggling to come to terms with their daughter’s illness.

“Presenting the trailer for #TheSkyIsPink — a film about love, made with so much of it! It’s a very proud milestone moment for me, because it’s my first as an actor & co-producer. Hope it gives you all the feels & inspires you to celebrate life!,” Chopra Jonas tweeted, along with the trailer.

‘The Sky is Pink’ is scheduled for an October 11 release.

Bhoot Part One review: Get on board the haunted ship with Vicky Kaushal

Bollywood: Actor-turned-politician Shatrughan Sinha was spotted in a wedding event in Lahore

Comedian Drew Carey pays tribute to ex-fiancé on her death

Our favourite jewellery moments from the Oscars 2020 red-carpet